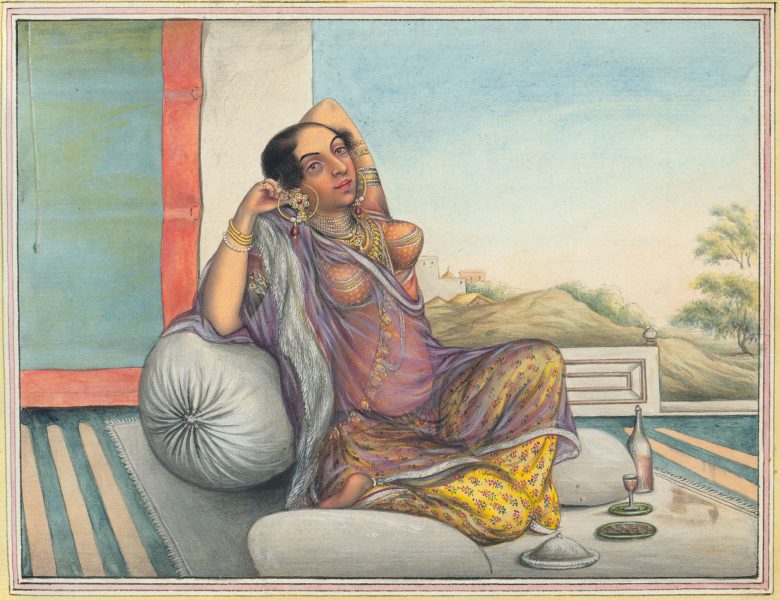 A Company School Album with 87 Paintings

The present album contains an important collection of 86 Company School paintings from the period between the 18th and 19th centuries, as well as a fine miniature portrait of a Mughal prince, most likely Dara Shikoh (or possibly Shah Jahan), dating probably from the eighteenth century.

Together, these paintings form a rich portrait of Indian history and life of the time, and the great variety of the subjects depicted speaks to the vast interest that the culture of subcontinent would have posed to Western eyes.

Amongst the wealth of Company School paintings, there are striking portraits of the Emperors Jahangir and Aurangzeb, as well as Shuju’ al-Dawla, Nawab of Oudh and Siraj al-Dawla, Nawab of Bengal. Several of these works are painted in the style of Tilly Kettle, the great English portrait painter who settled in India for more than a decade to paint British and Indian notables and local scenes.

Other paintings in the album depict poised noblemen and exuberant courtesans, painted with a rich palette of blended bright colours, achieving a vivid and smooth effect. Other depicted figures are a myriad of tradesmen and genre characters: a fortune-teller, a farmer, a messenger, holy men, a milliner, a money-changer, a traveller, a water-carrier, a seamstress, dancers, palanquin-bearers, cotton-cleaners, an oculist, a blacksmith, weavers, a sadhu or a maiden in worship (probably Bhairavi Ragini).

Detailed and sumptuous architectural studies show us some of the most majestic Indian monuments: the Taj Mahal, the Tomb of Akbar, the Tomb of I’timād-ud-Daulah in Agra; the Moti Masjid, the Tomb of Humayun, the Diwan-i-Khas and the Jama Masjid in Delhi; and scenes from Fatehpur Sikri and Allahabad.

The provenance of the album is also notable, as it was once in the collection of Charles William Dyson Perrins (1864–1958), as shown by his bookplate on the inside front cover. Dyson Perrins was a renowned Englishman who amassed one of the vastest and most important collections of manuscripts and printed books in the world. He is also known in the field of Mughal art for having acquired ‘two superb Mughal manuscripts, a Khamsa of Nizami and a Diwan of Anwari, both illustrated for Emperor Akbar by his most esteemed court painters.’ (Cary Welch in Falk 1985, p.27)