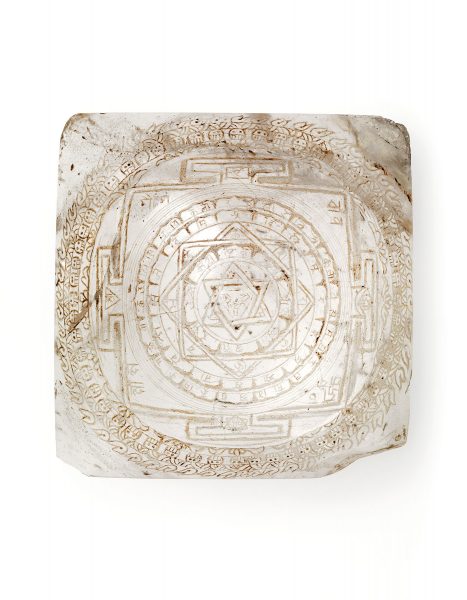 A technical term for a linear diagram of cosmic significance is yantra. Another popular word for a similar cosmic diagram is maṇḍala. Although both yantra and maṇḍala symbolically represent the universe, they are not identical. In a yantra, the presence of directional divinities, as in the present example, is indicated by the syllables of their mantras, whereas in a maṇḍala, the deities are represented by their anthropomorphic images. Thus, the Nepali and Tibetan thanka paintings, which bear images of Buddhist and Hindu deities, are maṇḍalas rather than a yantra.

A perfect example of yantra, consisting circles, and squares is delineated here on the convex surface of a jewel-like shiny rock-crystal. The script carved on this object confirms that this object originated from the Kathmandu Valley. Paleographically, it is datable to the eighteenth century CE.

In 1971 when Rawson published this rock-crystal yantra in his well-known catalog Tantra, he noticed the great significance of medium and expressed his view in following words:

“They [the yantras] may be made in permanent form of many substances: the most important is rock-crystal, which has a symbolism of its own. Its clear colourless substance, which can be shaped so as to focus light at its apex, is a very good emblem for the all-inclusive substance of fundamental reality; just as colourless light includes all the possible colours of light so crystal can serve as an analogy for the substance which includes all substances.”

This cosmic diagram might have been used either in an everyday tantric ritual or on a special occasion. During a ritual, an adept invites a peaceful or wrathful deity to reside in the yantra and performs the puja ritual offering him or her flowers, fruits, and vermilion powder, etc. Then the adept mentally imagines himself as the deity residing in the middle of the yantra. Such ritual is based on the popular age-old belief that a human being represents the cosmos and vice versa. In a tantric ritual, the adept may use the device to achieve supernatural magical power and utilizes it to fulfill his desire related to this world and next world.

Visualization of crystal clear light is indeed part of the ritual because it is believed that the cosmic deity emanates from that light. Although the authors of the tantric texts do not prescribe rock-crystal for making such yantra, traditionally artists must have been familiar with the significance of the medium. We do see some early examples of Kusana/Gandharan style crystal stūpa stylistically datable to second or third century CE or even earlier to the first century CE. Stupas are the Buddhist monuments regarded by some as the symbol of śūnyatā “emptiness” a keyword based on the Buddhist belief that void is the ultimate reality which contrasts with the colorful phenomena of the mundane world. This theory might have inspired the artist to use colorless crystal for the work.

In the present example, the cosmos is represented as a circular area protected by the walls of the flame and human skulls. Within these walls, we see a symbolic representation of a palatial compound with T-shaped four directional gates. This gated area shelters an octagonal structure circled by the symbolically rendered double rows of petals of the cosmic lotus. The circle inside the octagonal structure represents the pericarp of the cosmic lotus denoting the center of the universe. It is this center which harbors the most important symbol consisting of intertwined double triangles. Of these two angles, the upside down triangle ▽ symbolizes the female principle whereas the upright one △ stands for the male principle. It is believed that the cosmos is composed of these two principles. Almost certainly, not only the theory but also the symbol of double triangles appear to be very old because these two triangles are considered to be two syllables of the ancient script called Brāhmi, which was in vogue in the third century BCE or even earlier. It is true that the syllable e and va of this ancient script bear close similarity with the upside down and upright triangle. In the script of a later period, these two syllables are written in quite a different way and do not look like triangles at all.

Tentatively, this cosmic diagram can be identified as Mṛtyuñjaya (victory over death), a popular yantra associated with Hinduism. Although such yantra is more popular with the followers of Hinduism, the Newar Buddhists also have similar yantras. The exact identification of the various mantras given in this cosmic diagram awaits detail study. From the artistic point of view, we know for sure that this is a work of an accomplished Newar artist of the Kathmandu Valley. The choice of the medium, smoothly polished convex surface exposed to light, and the simplicity in delineating the symbolic elements such as the walls and gates, create a striking appearance.