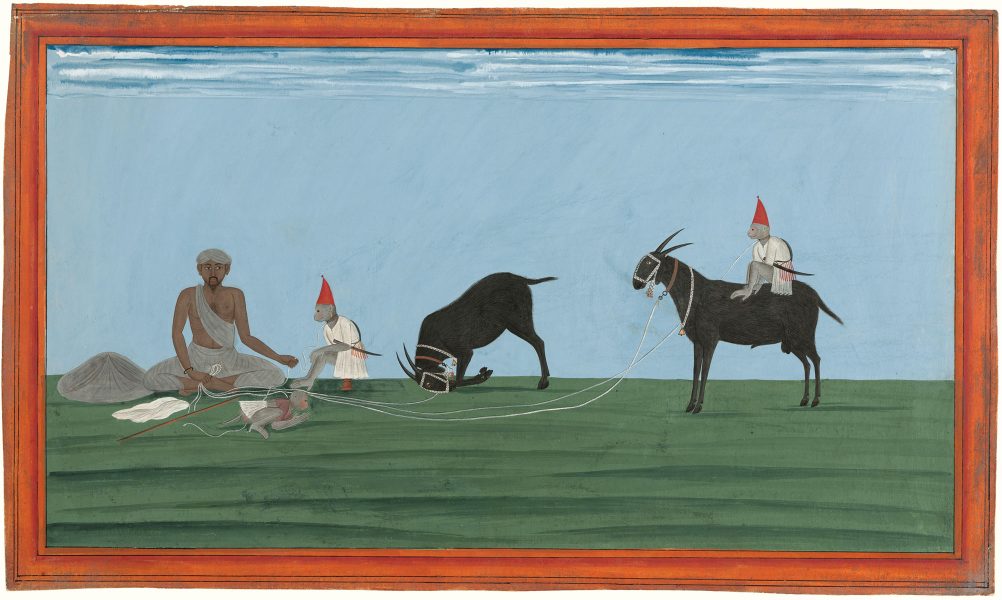 An entertainer with performing monkeys and goats

Inscribed on the cover sheet: Goats & Monkeys performing tricks as directed by their Master. A Monkey enlists himself as a soldier, & engaged to go & fight immediately Hyder – he is cloathed in proper regimentals, grows very saucy & very proud of himself – beats & turns away his wife – he takes the field mounted upon a goat for his horse, which soon gives the gentleman a bad fall – he is brought home sadly bruised & with a broken leg – matters are made up between him & his wife. N.B. Everyone who saw this exhibition was perfectly astonished at the sagacity, action & expression of the animals. D.S.

A monkey dressed in a tunic and pointed cap is riding a goat, then shown thrown over its head. He is seated on a morha demonstrating his damaged leg to his wife who bends down before him. A covered dish presumably containing rewards is on the ground beside him. The ground is dark green, with irregular darker green stripes, the sky plain blue with streaky white clouds above.

This page is from an album of paintings from the collection made by the East India Company surgeon David Simpson (D.G. Crawford, Roll of the Indian Medical Service, Calcutta, 1930, p. 265), who was stationed in south India in Trichinopoly 1780-86. He returned to England with a large collection of South Indian paintings and sculptures, which was sold at Christies 26 May 1792. Several albums of south Indian acrobat and animal training paintings seem to have been involved. One of them found its way into the collection of Sir Thomas Phillipps, part of his residual collection (MS 13405), that was sold Sotheby’s 27 November 1974, lot 774. That album had a cover originally with an inscription reading: Paintings exhibiting a great variety of attitudes, feats of Activities … performed by sets of Mendicant peoples, a remarkably expert company of which at Trichinopoly the proprietor hired to remain with his painters for some weeks to enable them to take sketches of all their Attitudes. Some of the paintings had cover sheets describing the subjects of the drawings, such as two sold by Maggs Bros in their Oriental Miniatures and Illumination Bulletin no. 39, nos. 54-55, and one now in the British Library (Add.Or.4301) which bears the initials D.S., i.e. David Simpson. Those three drawings have slightly different measurements and borders to our example, suggesting that there may have been other albums. Indeed the Maggs Bros’ Bulletin (p. 52) refers to three Phillipps manuscripts MS13416 and 14169 as well as 13405. The Loch family believe that their ancestor Henry Loch acquired the following painting when in India.

This painting as well as other known albums from the same provenance of David Simpson provides a well-documented source for early paintings in the Tanjore style, which was also practised at Trichinopoly. At the beginning of this period the albums were often in landscape format and illustrated festivals or rituals or in this case the amusements of the people of south India. For a large album of rituals in the life of a Brahmin produced by these artists 1780-86 and once in Simpson’s collection and now in the British Library’s, see Poovaya-Smith 1993. These albums were a speciality of the Tanjore moochis, originally leather-workers, who became the predominant caste of artists in the south in the British period. The albums were produced from about 1770 to 1820 and were mostly illustrative of the various occupations of the people of south India. In the earlier part of this period the paintings showed couples standing side by side, a man and his wife, carrying the implements of their profession or trade. They remained essentially static, although at a later period the figures were assembled into much grander groups or processional scenes. For further information on the development of the Tanjore style see Mildred Archer’s catalogues of 1972 and 1992.