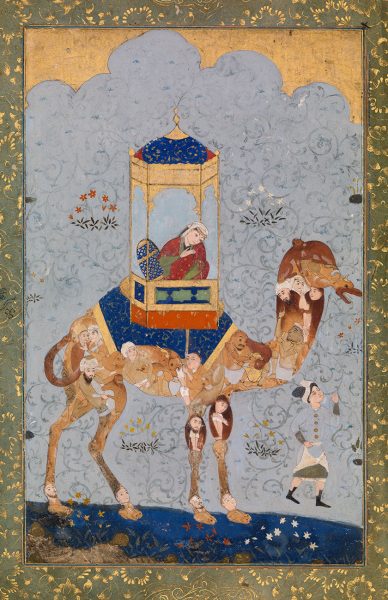 Lady in a Howdah atop a Composite Camel

Safavid period, Iran, circa 1570-80.
Opaque watercolour and gold on paper.

A noble lady is seated inside a splendid golden howdah, carried by a marvellous composite camel led by an attendant. The scene is imbued with a sense of wonder, strongly evoked by the fantastic beast comprising an inventive panoply of human figures, wild animals and bare-chested demons.

The body of the camel is designed as a hub of life, encompassing with great sensitivity a variety of mundane scenes and expressive interactions between figures. We see a couple in a loving embrace, a turbaned and bearded man holding the hand of a monkey that looks away, an amber-skinned div holding a bottle and handing a cup to a cat nearby, and even a Buddhist monk. Other figures depicted with great expression are rabbits, a dragon, an eagle, lions, foxes and various rodents,. Charming figures are seen next to more bizarre elements, such as the bodiless human heads forming the camel’s ankles, or the two monkeys who seemingly share one head and form the ear and head top of the camel.

The vibrant and wondrous mood of the composite creature is softened by the dream-like pose of the delicate lady sitting at the top. She has raised her back from the ornate cushion inside the howdah and is crouching in a gentle embrace of her own legs, with a mellow tilting of the head toward the shoulder. Her serene expression, slight smile and benevolent gaze all contribute to the absolute harmony that she exudes as the focus of the painting.

The soft blue background, decorated with scrolling stems and leaves, is punctuated by blossoming flowers, also present in the deep blue of the ground below. Similar elements are reflected in the patterns ornamenting the top of the howdah and the cloth laid over the camel’s body. Further fancy is present in the golden arched top of the painting, loosely delineated as if the outline of clouds.

Depictions of composite animals gained in popularity at the end of the sixteenth century, although earlier examples are known in Persian art. These are mysterious artworks, and while their meaning is not absolutely clear, their esoteric representations, marked by both myth and fantasy, seem to suggest a mystical significance. It is believed they embody the ideal of the unity of all creatures within God, or the human mastering of the irrational and the passions.

Composite drawings and paintings also mark a strong connection between Persia and India. Inspired by Persian prototypes, they became popular in the artistic repertoire of Mughal and Deccani India from the late 16th century, and are in fact one of the signs of the direct interconnection and mutual influence between Persia and the Deccan.

Two similar paintings of composite camels, albeit without a howdah or female figure atop, can be seen in the collections of the Fogg Museum in the Harvard Art Museums (1954.57), and The Metropolitan Museum of Art (25.83.6). Both share with our painting several elements of the composition of the camel, and while the painting in the Met includes a similar attendant leading the camel, the similarity is perhaps most striking in the Fogg Museum painting, which also displays a soft blue background decorated with flowers with a golden cloud-like arched top.