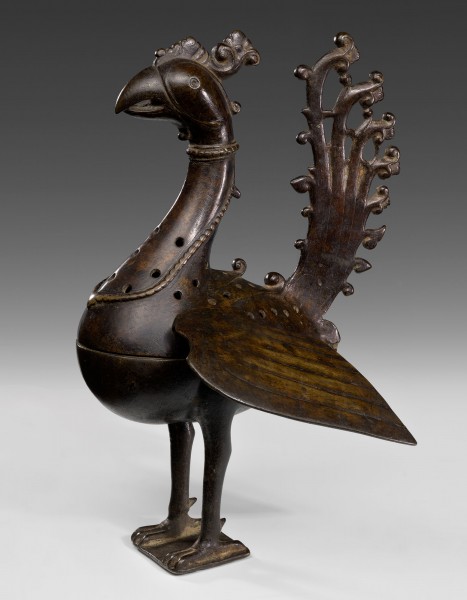 The present brass incense burner takes the shape of a peacock, the noble bird admired for its intense beauty. This is a rare example of such quality work from the Deccan, the region that made metal zoomorphic objects one of its specialties. The peacock is both expressive and majestic, combining a taste for pure form with an attention to intricate ornament.

Mark Zebrowski dedicated an entire chapter to the best Indian incense burners and other objects with animals shapes in his book Gold, Silver & Bronze from Mughal India, still considered today the reference publication in the subject. The present incense burner is described extensively in the opening of the chapter:

“The peacock was a popular motif in all periods of Indian art. A large incense burner in the shape of this proud bird strikes a remarkable balance between the abstraction of Islam and the sculptural qualities of the Indian tradition. Made of thickly cast brass, now covered in a rich black patina, the body and neck are pierced with large holes for the escape of the sweet-smelling smoke. The comma-shaped curls on the back, tail and crest indicate a southern origin. Similar peacocks prance upon the step-risers of the fantastic Throne of Prosperity represented in the Nujum al Ulum, an astrological manuscript dated 1570-1 which, according to a note written with the text, is known to have been in the royal library at Bijapur. Since this particular shape was obviously well defined by this date, and its vigorous design shows little of the naturalism associated with Mughal taste which began to affect Deccani art in the late sixteenth century, we can confidently assign it an earlier date, in the late fifteenth or early sixteenth century.” Zebrowski.

The present incense burner was exhibited in the landmark exhibition Sultans of Deccan India at The Metropolitan Museum of Art in 2015, and is published in the exhibition catalogue, where its “round shape of the head, high beak, wide-set eyes, and double string of pearls around the neck” are highlighted.