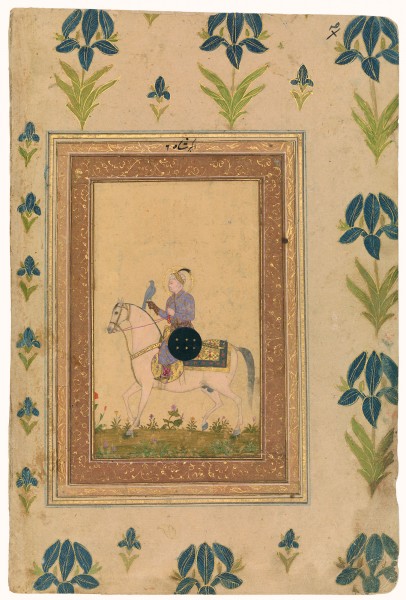 Portrait of the Emperor Akbar

The present delicately painted, Kishangarh portrait of the Emperor Akbar depicts him seated on horseback, and is datable to the early Aurangzeb period, when the Mughal Empire had reached its apogee of prosperity. The emperor’s refined features, the elegant horse and exquisitely drawn trappings clearly indicate a 17th century date. The painting would have been laid on one of the most important pages in an album composed in the late 17th or early 18th century, as seen by the floral borders that became fashionable at the time, in this case decorated with deep blue-purple irises and green foliage outlined with shining golden contours, treated in a more painterly manner.

The verso of the folio contains calligraphy, which in the Islamic tradition would have been considered as important as the portrait itself. It shows verses in nastaʿlīq, again surrounded by lively floral borders not dissimilar to borders found in the small Clive album.

The depiction of Akbar is a posthumous portrayal with grey hair, riding a beige horse, elegantly grasping horse reins with one hand while holding a grey falcon on his other hand wearing a leather glove. The emperor wears a purple jama and a white turban with a black aigrette, and carries a black shield over his waist.

The portrait is finely painted, with a seamless softness of brushstroke combined with the clarity of drawing in nim-qalam style. Different textures and patterns are recreated with elegance and enamel-like detail. A subtle palette of subdued tones is punctuated with particular details in brighter colours and with the exuberance in the use of gold.