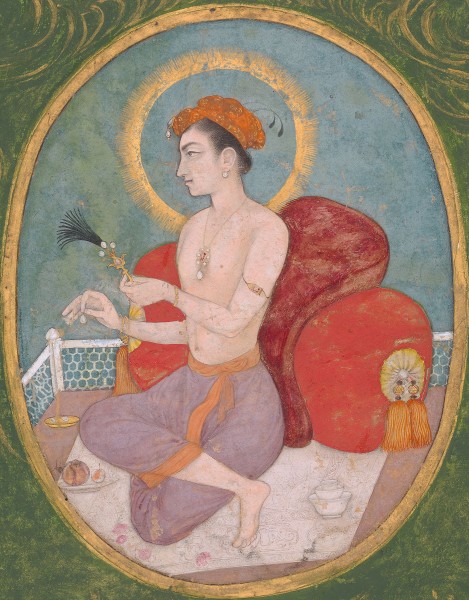 In this remarkable portrait, Dara Shikoh sits cross-legged against two large red cushions on a pale summer carpet on a white-fenced platform. He wears a mauve lungi over his lower body and his torso is bare. On his head is an orange and gold turban adorned with a jewel and a pearl, and his head is encircled by a gold nimbus. He also wears a necklace, a bazuband and bracelets, and in his hands he holds a pearl and a jewelled aigrette. The oval portrait is mounted with eighteenth-century borders, of which the inner area is decorated in gold on green ground with angels holding aloft a royal canopy, while the outer borders consist of gold-flecked cream paper.

The identification of the sitter as Dara Shikoh is attested to not only by general facial resemblance to the many known portraits of the prince, but also through the manner in which he is portrayed – a prince sitting in such a recognisably ascetic pose would be unusual for any other Mughal prince. To these two factors can be added the distinguishing feature of the prominent curl of hair at the nape of his neck, which appears in almost all portraits of Dara Shikoh and can be seen as a fairly reliable identifying motif. Judging by the many portraits of Mughal princes of the period, it appears that from his late teens Dara Shikoh grew his hair longer at the back of his neck than was the norm for his brothers and cousins (or did not cover it so fully with his turban).2

The present portrait is remarkable for depicting Dara Shikoh in an overtly ascetic pose that has yogic associations. Mughal princes were usually portrayed sitting in a more straightforward cross-legged pose or in a kneeling position, and Muslim holy men and sufi mendicants were often shown with their legs drawn up to their chests, sometimes with a band to support them. The present pose with the legs crossed over in an exaggerated manner is essentially a yogic pose known as gomukhasana and is more often associated with yogis and other Hindu ascetics.3 Furthermore, Dara Shikoh is depicted here with a totally bare torso with only a lungi over his legs, which is extremely rare for a Mughal royal figure, and his body is somewhat attenuated, further emphasising the ascetic association. However, he is adorned with Mughal jewellery and holds jewelled objects symbolic of a more orthodox Mughal princely status. He wears a necklace featuring a large spinel or ruby surrounded by pearls, a gold bazuband set with a spinel or ruby on his left arm and gold bracelets round his wrists. He wears a pearl earring and a pearl and diamond turban ornament, while in his right hand he holds another pearl and in his left hand a large gold, ruby and pearl aigrette, a type of object that featured frequently in Mughal royal gift-giving. Similarly, the fenced-off terrace, cushions covered with rich red textile, summer carpet and bowl of fruit are features often found in conventional Mughal princely portraits.

Dara Shikoh, born in 1615, is well-known to have had a strong interest in mystical aspects of Islam, primarily the Sufi traditions, as well as Hinduism. His early education at court sparked an interest in Sufism and his friendship with and patronage of Chandra-Bahn Brahman, a Hindu secretary at court, led him to explore Hinduism. He became acquainted with Mian Mir (d. 1635) of the Qadiriyyah Sufi Order, and through him he came into contact with other Sufi masters such as Mullah Shah (d. 1661), also of the Qadiriyyah Order, and Baba Lal Das, a follower of Kabir, the early 16th century poet and mystic. Having written a biography of his teacher Mian Mir in 1635 entitled Sakinat al-Awliya, Dara Shikoh formally became a follower of Mullah Shah in 1640. He produced several significant works on Sufism and other mystical subjects, including a biographical work of Muslims saints entitled Safinat al-Awliya. He translated fifty-two of the Upanishads himself and commissioned the translation into Persian of several Hindu religious texts including the Yog Vasistha, the Baghavad Gita and the Upanishads in full. He frequently met with Yogis and Pandits and was interviewed by Baba Lal of Malwa, conversations that were recorded in a Persian work entitled Nadu un Mikat.4 He was an important figure in the efforts to create a synthesis between mystical Islam and Hinduism and his ultimate aim was to achieve mutual tolerance between the two religions through “the confluence of the two oceans” (Majma‘a al-Bahrayn), a phrase from the Qur’an that he chose for his own major work on the subject.5 His great interest in mysticism and his more philosophical, less martial approach to the role of a royal prince is frequently reflected in art of the period, with many miniature paintings showing him visiting holy men, from a young age right through to his mature years in the 1650s6, and the Dara Shikoh Album in the British Library, made for the prince around 1630-35, contains two fine studies of ascetics attributed to the artist Govardhan.7

The present portrait of Dara Shikoh thus mirrors his religious and literary interests, demonstrating his strong association with mysticism and asceticism and referencing Hinduism, while retaining the physical symbols of royal Mughal power, represented by the jewellery, as well as the Mughal compositional trope of a seated prince on a fenced platform with large cushions and a carpet. It is a powerful and iconic image of the prince-mystic and his pan-religious character and interests.

There are two closely related portraits of Dara Shikoh, both datable to approximately the same period, both of oval format and both executed in a coloured drawing technique. One is in the Virginia Museum of Fine Arts (see fig. 1) and the other was formerly in the Warren Hastings Album8. The composition of the Virginia Museum and Warren Hastings portraits are identical, save for the presence of flowers behind the marble fence in the Virginia Museum example: Dara Shikoh (including his tuft of neck hair) is seated in a cross-legged pose against two cushions on a fenced platform; there are vessels and fruit on the ground, but there is no carpet; he wears a thin muslin jama over thin payjamas and in his hands, instead of jewelled objects, he holds a fruit-laden dish and small individual fruits. The major elements of these two works are identical to the present portrait, but the way Dara Shikoh sits in the Virginia Museum and Warren Hastings portraits is more conventional and less overtly ascetic, with his legs crossed in a more straightforward pose that could possibly be seen as the yogic pose sukhasana but was such a ubiquitous way of sitting all over South Asia that it was not particularly associated with yogic figures or themes and was often the pose in which Mughal princes and holy men were portrayed in paintings. His clothes in the Virginia Museum and Warren Hastings portraits are also more conventional for a Mughal prince or aristocrat in hot weather. Thus, although compositionally similar to the present portrait, they depict Dara Shikoh in a more conventional Mughal/Muslim manner, highlighting the unusually ascetic nature of the present work.

It is also interesting to compare the present work to two posthumous paintings dating from the same period that show Dara Shikoh’s grandfather Emperor Jahangir seated in ascetic poses, and there may even be a direct link (see figs. 2 and 3). Both show Jahangir, his head surrounded by a nimbus, seated cross-legged on a carpet receiving a cup from a princess seated opposite (possibly intended to represent Nur Jahan). In one, datable to c. 1625, he sits with legs crossed in the same gomukhasana manner as here9; in the other, datable to c. 1640-50, Jahangir is seated in a slightly different but still ascetic cross-legged posture, a version of sukhasana, and, like the present portrait, he wears only a lungi and has a bare torso10. The latter example has an ascetic theme and one could conjecture that it too might have been commissioned by Dara Shikoh, who is known to have employed artists himself and may have been keen to reinforce the idea of a royal forebear with mystical interests, thereby helping to legitimise his own interest in mystical matters. It should be remembered that Jahangir interacted with both Muslim and Hindu ascetics on many occasions. In 1614 he credited his recovery from an illness to his prayers to the Sufi master Muin al-Din Chishti, and he mentions in his memoirs that Sheikh Salim Chishti had appointed him a spiritual successor11. He also visited and conversed with the Hindu hermit Gosain Jadrup on several occasions12. In discussing the latter, he commented that the science of the Vedanta equates to the science of Sufism and says that Gosain Jadrup “made a great impression on me.”13

A further interesting comparison can be made with a painting of a royal ascetic of c. 1650-60 (see fig. 4), which depicts a princely figure dressed in a brightly coloured coat and seated cross-legged in gomukhasana (the same pose as Dara Shikoh in the present work) on a tiger skin with a crescent-moon nimbus round his head and a variety of objects around him.14

When the present portrait was sold at Sotheby’s on 21 November (lot 91), it was listed in the catalogue as “The Property of a Gentleman. Formerly in the Collection of John Lord Northwick, and probably brought back from India by that great man, Warren Hastings.” Warren Hastings (1732-1818) was Governor-general of India from 1773 to 1785 and during his time in India acquired a large number of paintings and calligraphic works, some in albums and some as single pages. He brought them back to Britain and kept them at his house, Daylesford, on the Gloucestershire-Worcestershire border. After his death the contents of the house were auctioned by Messrs Farebrother, Clarke and Lye.

John, 2nd Lord Northwick (1770-1859) was a wealthy landowner and art collector who became friends with Nelson, Sir William and Lady Hamilton and Edward Gibbon in Italy during his Grand Tour. He had eclectic taste and assembled a very large and highly important collection of art, which he kept first at Northwick Park on the Gloucestershire-Worcestershire border, and then at Thirlestaine House in Cheltenham, opening the latter to the public so that they could enjoy viewing his extraordinary collection15. Since his family seat at Northwick Park was close to Warren Hastings house at Daylesford, it is likely that he acquired the present painting and others at the 1818 auction of Hastings’ collection.

Lord Northwick died in 1859 intestate and his collection was sold in a marathon 21-day auction by Phillips. Some works were bought back by the 3rd Lord Northwick and remained at Northwick Park, passing down through the family to his grandson Captain George Spencer-Churchill, whose remaining collection was sold at Christie’s in 1965. Thirlestaine House in Cheltenham was sold on the 2nd Lord Northwick’s death to Sir Thomas Phillipps (1792-1872), the great collector of manuscripts and books. It is an interesting coincidence that Sir Thomas Phillipps also purchased many Indian and Persian works from the Warren Hastings collection at Daylesford, including one of the coloured drawings of Dara Shikoh discussed above, which was then sold in the auction of the Sir Thomas Phillipps Collection at Sotheby’s in 1974.