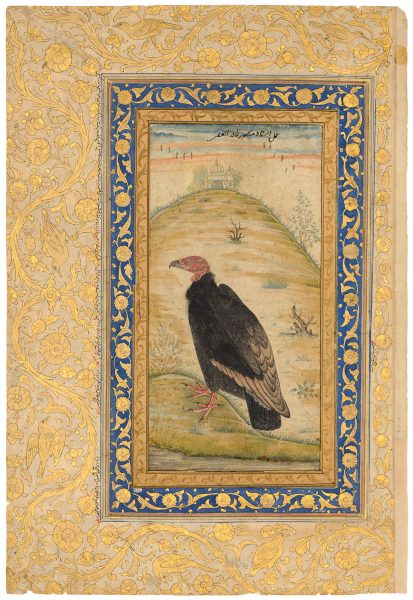 A large vulture stands majestically on a grassy mound, seen from profile facing left, its strong feet and razor sharp claws clasping the foliage beneath. Behind the imposing bird, a barren yet evocative landscape made of delicate vegetation and lifeless bush branches ascends onto a hilltop with a white-marbled edifice in the Mughal architectural tradition. A flock of birds flies across the sky, where blue and red tones tell us that sunset approaches.

The vulture has been painted with particular refinement. Not only is it drawn with great naturalism and harmonious shapes, but also displays a special attention to the modulation of forms and textures. We can almost feel the coarseness of the pink hard skin on the bird’s head and feet, while its plumage is smooth as velvet, traversing a gradation of tonalities, from the darkest, black feathers closer to the neck, to the lightest ones towards the bottom of the body.

The Individuality of the bird is apparent if compare it to the Vulture by Mansur in the Metropolitan museum from the Kevorkian album. We can clearly see that this is a specific, and different bird also most likely from the aviary that Jahangir maintained.

The painting is stylistically datable to circa 1620 during the Emperor Jahangir’s reign. At the top, over the sky, an inscription reading ‘amal ustad Mansur Nadir al-‘Asr, attributes it to the work of one of India’s great Mughal masters, the painter Mansur, the court artist referred to by Jahangir as “unique in his time”. Inscriptions by the same hand are found in other works by the master Mansur.

The masterful painting is laid down on a manuscript page from the Farhang-i Jahangiri, the dictionary of the Persian language compiled by 1608 and named after the Emperor. Our leaf displays a beautiful cobalt border with scrolling golden floral motifs, surrounded by wide margins illuminated in gold with the most striking and wonderful blooming flowers, twirling vegetation and elegantly drawn birds. These precious elements were drawn with great dexterity and expression, lending an vivid sense of life and light to the more sombre theme of the bird of prey depicted in the centre of the page. The verso of the leaf contains a calligraphic panel in nasta’liq, in clouds against a gold and polychrome ground, and a line of text from the original manuscript. The panel is similarly mounted between a gold-illuminated red border on margins decorated with exquisite golden floral and animal designs.

Ustad (master) Mansur, active at Mughal courts between the late 1580s until circa 1626, first worked for the Emperor Akbar, but received the highest accolade, the title of Nadir al-Asr (the Wonder of the Age), at a later stage from Jahangir. He was favoured by the latter Emperor for his unparalleled ability to lend naturalism to his creations, which were a crucial part of the Emperor’s interest in studying the fauna and flora of India.

“In a fire-and-brimstone palette of blacks, grays, and turkey-wattle red, Mansur arranged two incongruously elegant scavengers for the fullest aesthetic and dramatic effect. While contemplating and sketching, he noted beauty in their ugliness and understood their wise patience. Hungry-eyed, they stare like cats at goldfish, spellbound by something – perhaps enticing carrion – arranged by the artist. A few streaks of white and tan rocks for perching, sprigs of foliage, and spare brushstrokes of nim qalam (washes of earth pigments, now slightly darkened by oxidization) provide a convincingly natural stage for the macabre pair.” (Cary Welch)

We can safely say that in our painting the hand of the master painted the bird given its outstanding naturalism and delicacy. The landscape, and architecture may have been executed by a follower in the artist’s atelier, which was common practice.