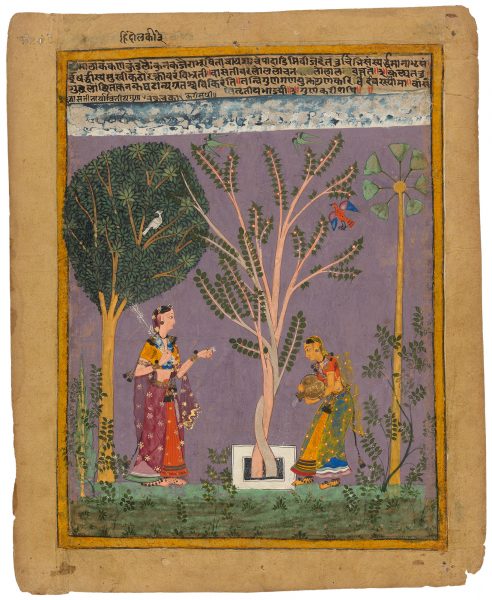 The ragini’s identity is provided by the label in the upper margin which states that she is Hindol ki 3, 3rd wife of Hindol, namely Vasanti raging.

This painting is based on Kshemkarna’s Ragamala dated 1570. He describes six Ragas with thirty one Raginis and forty nine Ragaputras or sons. This system was mainly followed by the painters of the hill states and Ragamalas based on Kshemkarna’s system outside the hill states are rare; being noted in two Deccan Ragamalas dated 1732 and 17711. This painting of Vasanti Ragini is therefore is a rare example of an early 17th century Deccani Ragamala based on this system. North Deccani paintings are still poorly understood due to a lack of material or dated paintings. Zebrowski attributes nine paintings (all of them Ragamalas) to the late 16th century from the North Deccan, which illustrate similarities to this painting2.

This painting of Ragini Vasanti, 3rd wife of Raga Hindol, is shown dressed in a red garment, laden with jewellery, holding a flower stick with an anxious expression – as described by Kshemkarna3. The mood of the Ragini is that of spring (Vasant) as indicated by the burgeoning foliage and flowers. It is a time of celebration, abundance and joy. At this time of happiness, the lady waits for her lover or husband to return for the approaching festival of Holi. The sentiment of separation, viyoga, is subtly conveyed by the lady’s anxious expression.

Paintings from this early series are rare. The artists of this series show a masterful understanding of the Kshemkarna system and yet display typical Deccani exuberance. Two slender shrubs of jasmine grow along the larger trees, the lady holding a jasmine stick and blossom. Two trees grow from a central structure – the trees sprouting like a floral fountain.   The trunks entwine, one darker, the other fair, a reference to the union of Radha and Krishna. The fairer tree sprouts the five-petaled Indian champa (magnolia). Beside the darker tree is the masculine toddy palm, strong and firm. On the left, a feminine tree, abundant of foliage and birdlife. Parakeets glide over the lilac ground and there is an unusual white cuckoo (chataka) perched on the tree. Kshemkarna likens the sound of the quail to Vasanti ragini, and there is a fantastical purple, blue and red bird singing while facing the lady.

The few paintings of this Ragamala show similarity to previously published North Deccani Ragamalas from late 16th and early 17th century. There is consonance in the Sanskrit texts and in the treatment of the foliage. Paintings from the North Deccan of this period show slender, twining tree trunks, painterly foliage, beautiful birdlife and monochromatic backgrounds. Rain and water droplets are shown as long, linear white marks across dark ground, as shown in the fountain chamber. The sky is always painted as a thin linear or curvilinear band across the top with sketchily drawn clouds.

It has been noted that relatively little iconographic tradition was available for painters using the Kshemkarna system as opposed to extensive Ragamala works available for the Rajasthani systems6. Due to the lack of an established tradition, the paintings of the Kshemkarna system are often idiosyncratic. More often than not, paintings are copied within the workshops and therefore iconographic errors are perpetuated. In this series one often sees an explanatory text on top explaining the Raga for the benefit of future painters or patrons.

Interestingly, the text ends by mentioning Vasanti as being Tritiya bharya || Gunkari sakhi || (3rd wife. Friend of Gunkali). This inscription is intriguing as Gunkari Ragini is related to Raga Malkos and does not bear much resemblance to Vasanti musically. However they are related pictorially with similar imagery of solitary ladies in gardens, collecting flowering or listening to birds. The note therefore alludes to pictorial similarities between Vasanti and Gunkari for benefit of future artists or patrons.

There is also compositional consonance between this series and paintings from Malwa. This important Ragamala series forms a bridge between the Malwa and Deccani miniature paintings and fills a gap in the poorly understood North Deccani paintings between late 16th and early 17th centuries.