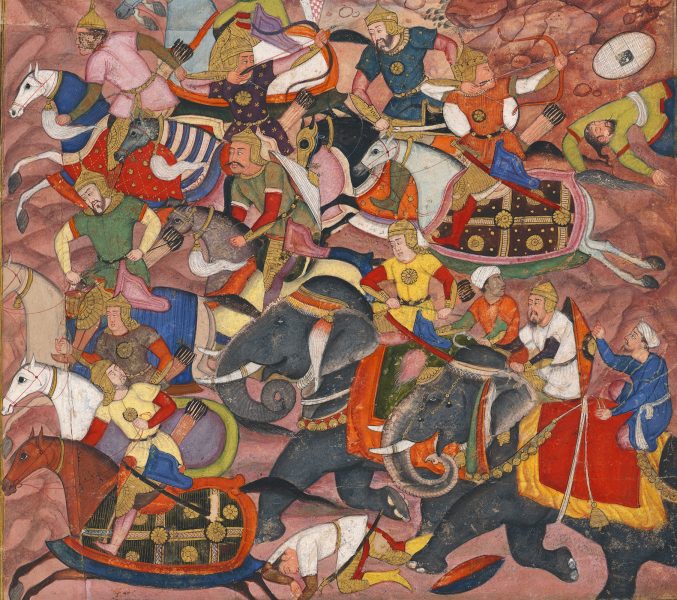 A Fragment from a Leaf from the ‘Third’ Akbarnama

This remarkable battle scene leaf comes from the third volume, or Ain-i-Akbari, of the historical three-volume Akbar Nama (Book of Akbar), commissioned by the third Mughal Emperor Akbar and written by the court historian and biographer Abu’l-Fazl ibn Mubarak in the late 16th century.

In extraordinary detail we observe the mounted charge of warriors and beasts as they advance upon the enemy, moving from right to left in a cavalcade of horses and elephants that leave many enemy soldiers trampled in their wake. The density and attention to detail is a great graphic achievement as the artist has layered the scene with dynamic tension and a fluid sense of movement.

The chromatic variation and vividness are mesmerizing as we distinguish those warriors on horseback from those riding elephants. Cavalrymen are shown wearing tunics in various muted tones; these tunics were loose clothing reaching the knees and were padded with linen as a protective gear against soaring arrows. At the back of the horsemen, we observe quivers heavy with arrows in preparation for attack. A pair of servants, dressed in ordinary garments and unprotected headgear, sit at the back of elephants commandeered by their masters. On the barren plain this army traverses, two enemy soldiers can be seen, defeated and lifeless with their weapons strewn about them.

The animals are wonderfully depicted and animated as their galloping forms move across the visual field: the horses are lean and shown in full stride while saddled and caparisoned in great ornamental patterns and chromatic intensity. The elephants are shown moving in their great might while decorated with headdresses and ornamental reigns and

The third book of the Akbar-nama, called the Ain-i-Akbari, is virtually a separate work, as it departs from the narrative style of the earlier books and presents a detailed description of Akbar’s India and containing information on Akbar’s reign in the form of administrative reports, similar to a gazetteer, and is in fact the administrative report and statistical return of his government as it was about 1590.