This refined fruit bowl by the renowned and enigmatic Maison Desny is an extraordinary demonstration of expressive metalwork. With its rigorous geometric configuration and dynamic proportions, it appears novel and avant-garde even by today’s standards. As a double-dome conceit – one functioning as an open vessel and the other as closed base – it is a truly expressionistic folly.

The large upper bowl is divided from the lower by a sharp angular blade, which creates an ‘X’ formation between the two opposing domes and proposes a radical torsion and connotes a tension in the form tantamount to a balletic position, where upper body and feet flex and tense to produce a moment of beauty.

The arresting juxtaposition of perpendicular shapes and planes seen in this elegant vessel became the trademarks of Desny, which operated at 122 Avenue des Champs-Elysees in Paris between 1927 and 1933. Maison Desny was established by two designers, Desnet and Rend Nauny. By 1931, the firm had established a select clientele including Georges-Henri Riviere, Pierre David-Weill, Mlle Thurnauer and the King of Belgium.

Among Desny’s most celebrated designs, the present design became one of the treasured decorative objects of the Maharaja and Maharani of Indore’s modernist palace in Indore, Manik Bagh, and the Maharani was famously photographed looking into her bowl by Man Ray in 1927-1930. 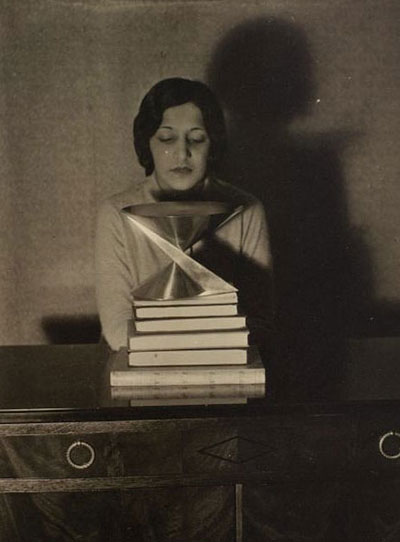 In effect, the design house of Desny offered complete interiors; these were brought to fruition with the assistance, on occasion, of decorators, artists and designers such as André Masson, Alberto and Diego Giacometti, Jean-Michel Frank, Djo-Bourgeois, and the architect, Robert Mallet-Stevens, with whom La Maison Desny was closely associated in several decorating ventures.

The silver plate seen on the bowl is an expression of the firm’s alignment with the modernist movement’s philosophies on mass-production in its choice of metal alloys, rather than silver as the preferred material in which to execute its models. To give an appearance of opulence, a chrome or silver electroplated finish was applied to the metal. This was in common with the practice of many individual orfèvres such as Christofle in Paris at the time, and the designs of Marianne Brandt and Wolfgang Tumpel for domestic wares some years earlier at the Bauhaus.