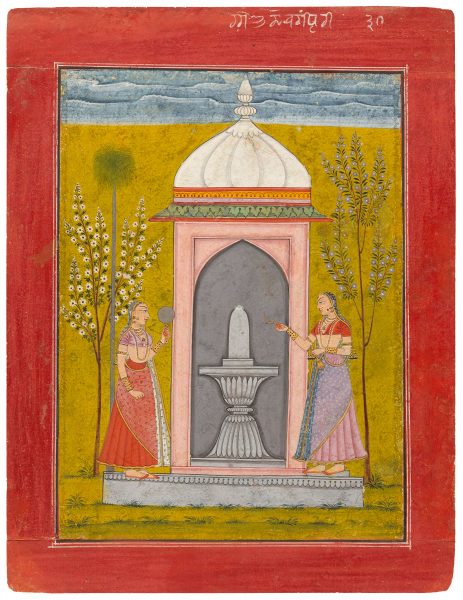 Eminent art historian and writer W. G. Archer cited the period from 1650 to 1780 as the time in which the hill state of Bilaspur flourished, comparable in status to other prominent kingdoms of Garhwal and Mandi in the ‘Punjab Hills’. Known as Kahlur then, the overall prosperity of the state allowed its rulers to freely patronise the arts – dance, music and painting, resulting in an increased commissioning of ragamala sets. Archer believed that these paintings served as “accompaniments to music”, reflective, as they were of the integral mood of musical modes (Archer, 1973). It is only natural then that artists translated these purely abstract ideas into stunning works of visual art, capturing the spirit of each raga through personified characters.

In this painting, the graceful ragini performs aarti – with a diya lamp in one hand and a bell in the other. Dressed in a red blouse and a long pink skirt, her head is covered with a translucent blue odhani that wraps around her lower body. She stands in devotion, facing the shivalinga, the aniconic form of Shiva. Opposite her an attendant dressed in the same colours, but reversed, also looks at the sacred image placed at the very centre of the composition. Both women are decked in bejewelled gold ornaments from head to toe, painted delicately to further embellish their beauty. The long pretty faces are in profile – almost in a straight line from the forehead to the tip of the nose, accentuating the curves of their big slanting eyes and arched eyebrows. The gentleness of the image, the rich contrasting colours, and the elegant splendour of the figures is characteristic to the style of Bilaspur, as are the trees that flank the temple, their slender branches completely laden with flowers.

Though usually in paintings from this state, there was a preference for rectangular architectural spaces that lie horizontally within the image, the temple here rises up to touch the top edge of the painting. The slight shadowing around the linga, and the parallel rows of grass on the ground below, are the artist’s attempts to add depth to the composition. A preference for the naturalistic style in painting is attributed to influences of Mughal art, as Bilaspur remained more or less independent from the eminent styles of the other hill states. Despite this, some attributes still remained highly idealised, such as the faces of the women, and the flat ochre background that almost stands like a wall behind the temple, cut off sharply to reveal the blue sky.

As the bell in the ragini’s hand indicates, music is an integral part of worship in the Hindu tradition. So much so that ragas and raginis are, at times, tied to specific deities, serving as tools for devotees to invite gods and goddesses into their earthly images. Devagiri ragini is always depicted in prayer, a testament to her devout and pious nature, though the deity she worships changes based on the religious inclinations of the patrons and artists. A later painting of this ragini from the same school, in the Museum of Fine Arts, Boston (17.3218), shows the ragini with an image of Vishnu instead.