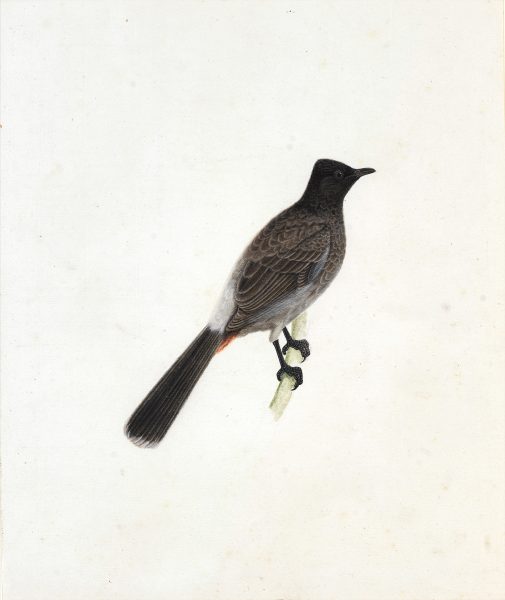 Calcutta or Barakpore
Circa 1810
The verso with inscriptions in nastaʼliq
Opaque watercolour on paper
32.5 x 27.5 cm each leaf

These delicate and extraordinary renditions of birds are great examples of the tradition of watercolour painting that emerged in the 18th and 19th centuries as the British East India Company expanded its purview in India and the officers became active patrons of the arts.

Indian artists sought to satisfy their patrons’ European tastes, scientific interests, and sense of discovery. The artists, some of whom had previously trained in late-Mughal techniques of painting, evolved their styles to create large-scale images of India’s flora, fauna, people, and landscape. While formal natural studies comprise a major genre of Company painting, other idioms, such as the picturesque—which offered romanticized views of landscape and architecture—also flourished.

In this exquisite quartet of paintings from the collection of the late Baron Fairhaven, all with Persian inscriptions on the verso, four birds are rendered with the most delicate of touches, highlighting their individual character and unique chromatic qualities.

We first observe a charming and animated painting of a Red-vented Bullbul (Pycnonotus cafer wetmorei), a member of the bulbul family of passerines and a resident breeder across the Indian subcontinent. The artist shows the delicate mottling of the skin on the bird’s feet, which grasps an ascending branch. The subtle variations in tonality are remarkable as white under feathers of the thigh lead to subtle layering of brown feathers across the body. Only at the rump do we observe a splash of white feathers as contrast, as well as at the very edge of the tail. The very distinctive short crest gives the head a squarish appearance, where darker feathers dominate the rendering but allowing for the masterful variations in texture and tone that give the bird striking realism of form.

In the second painting, a Long-tailed Shrike (Lanius erythronotus) stands on two slender tarsi while grasping a verdant branch firmly with its feet. The darkness of its skin in this part of the body is echoed in some of the delicate plumage, namely at the tail, the primary feathers and the cheek patch, where black feathers set off the radiant beauty of the yellow and white ones surrounding them. With consummate refinement and the most delicate of sable brushes, the artist has applied intricate layering in the feathered coat. The mask-like dark feathers at the cheeks lead to the brilliance of the eye ring, within which is contained the circular eye. Diminutive barbs emerge near the beak, with its curving upper beak overlapping the lower.

The third painting represents the Asian Koel (Eudynamys scolopaceus scolopaceus), rendered masterfully with the rich pattern of contrasting feathers, dark and light, across its head and body. Each feather is given its ultimate density and weight to create the sensation of a live animal with a beating heart within. Its reddish eye is focused, intense and full of character while the beak is given a subtle wash to accentuate the glossy appearance of its keratin formation. One of the most legendary of birds in Indian lore and tradition. in effect, the word “koel” is onomatopoeic, echoing the sound of the bird. As these are familiar birds with loud calls, references to them are common in folklore, myth and poetry; it is traditionally held in high regard for its song and revered in the Manusmriti, an ancient legal text among the many Dharmaśāstras of Hinduism.

The fourth example of the Company School avian watercolours is dedicated to the Large Grey Babbler (Argya malcolmi), a delicate bird whose brown body with creamy outer tail feathers has been masterfully captured. The silhouette of the body is balanced against the most delicate of legs and feet, the latter splayed to show the reach and refinement of the talons and claws. The creamy feathers that cover and protect the brown feathers of the body are easily visible as they fly with fluttery wing beats low over the ground. The artist has deftly captured the contrast between the dark feathers of the lores while depicting the grey with white shaft streaks on the feathers of the forehead. All the naturalistic and unpredictable definition of the feathers is captured with critical observance. Even the tail, which is faintly cross-barred, is given ultimate naturalism and its weight captured with sublime appreciation.

Provenance: From the Collection of the late Baron Fairhaven.