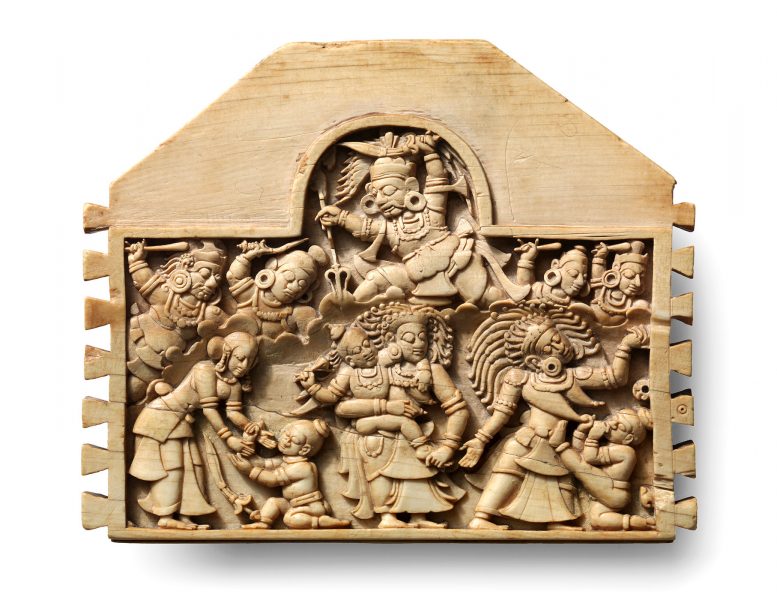 Ivory panel from a precious box.

This rare ivory panel was used to decorate a precious and important 16th century casket or box from Vijayanagara, the capital of the great Empire that flourished in the 15th and 16th centuries in Central India.

The episode being narrated in the carved panel is the story of Krishna slaying the Demoness Putana, which occurs in different Hindu scriptures and other Indian narratives such as the Bhagavata Purana, and was also a theme depicted in many miniature paintings.

Putana was a demoness sent by Krishna’s evil uncle, the king Kamsa, to kill the infant Krishna. She lived in a cave deep in the forest, and had a wild appearance. She was, however, sent by Kamsa as a young and beautiful woman, who met and offered to suckle Krishna with her poisonous milk.  Yet, instead of succumbing to death,  Krishna sucks all the life out of Putana.

Given the symbolic meaning of the scene where Krishna slays Putana, the present ivory panel was seen as invoking his heroic aspect in the protection of children.

The panel is executed masterfully and with great refinement, with a sunk centre where several figures are carved in a dynamic and expressive group. The artist follows the iconography and sophisticated representational techniques of the Indian miniature paintings, choosing to depict several scenes as a continuous narrative, told in three different moments juxtaposed, combined in one seamless composition.