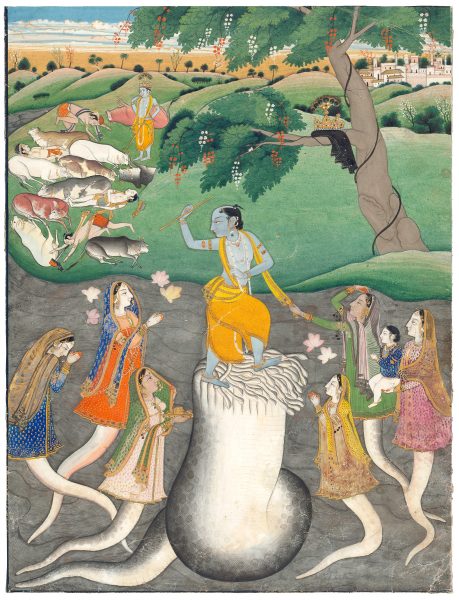 Krishna Subdues Kaliya, The Snake Demon in The Yamuna River

In this superbly refined and masterfully composed early 19th century painting, in a dramatic moment known as Kāliya Nāga Mardan, Krishna dances triumphantly over the subdued serpentine body of Kāliya and the moment is captured as Kāliya’s wives beg Krishna for mercy and forgiveness. In extraordinary detail, the artist focuses the viewer on the dramatic scene playing out in the foreground but also establishes with great sensitivity the atmosphere and environment that played background to this mythological event.

The dramatic interplay between Krishna and the wives of Kāliya is rendered in extraordinary chromatic variation – the large but defeated body of the venomous semi-divine being, Kāliya, is seen on the bank of the Yamunā River; pale and flaccid, his large serpentine body remains subdued as Krishna stands atop his multi-headed form. Dressed in a vivid gold dhoti, Krishna stands bare-chested and holding a small lance; his crown, topped with peacock feathers, can be seen resting on the branches of a nearby solitary Kadamba tree.

After hearing of the terror that Kāliya imposed upon the people of As Krishna stands triumphant on Kāliya’s head, Kāliya’s wives come and pray to Krishna with joined palms, worshiping him and praying for mercy for their husband. Kāliya recognized the greatness of Krishna and surrendered, promising he would not harass anybody again. Krishna pardoned him after performing a final dance upon his head. The celebration of Nāga Nathaiyā or Nāga Nṛitya is associated with this particular tale.

The wives of Kāliya are given dignified form and, although their bodies are those of serpents, their human extended form is illustrated with great beauty and refinement. The all wear the colourful equivalent of choli tops over long lehenga or pavada skirts and, on top, dupatta scarves. All praise, venerate or implore Krishna as hands are held in prayer or in offering of flowers and the innocent company of a young child in the arms of its mother.

In the background of the tableau lie the cowherds and their cows after having drunk from the pool poisoned by the serpent Kāliya; the postures assumed by men and beasts lend the scene a certain surrealistic quality. Beyond this scene further in the background, past the verdant rolling hills, we observe the nearby town of Vrindavan.

The legend behind this refined painting is one of the great legends of Indian mythology and in which Kāliya is subjugated by Krishna after Krishna comes to the defence of the people of Vrindavan and after terrifying the sage Durvasā, who had come as a guest of Rādhā. Krishna challenges Kāliya, is momentarily ensnared in his serpentine coil but frees himself and regains the upper hand by proceeding to jump on all of Kāliya’s heads so as to release the poison in the snake and stop him polluting the Yamunā. In the end, Kāliya is exiled into Pātāla, much to the celebration of the people of Vrindavan.