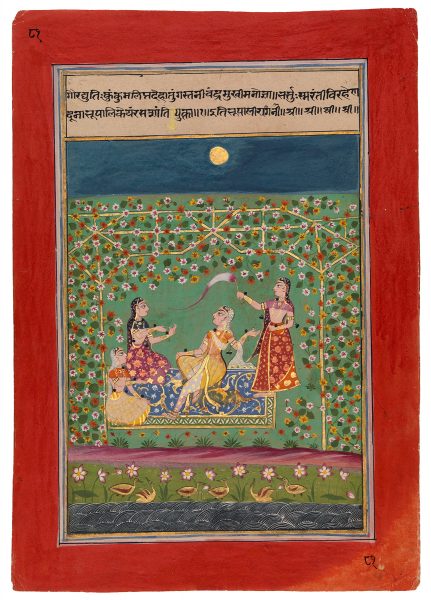 In this remarkable tableau, the elegant female protagonist of the scene is attended by a lady, who bears a flywhisk in her hand. She sits in a lush verdant landscape, on a blue rug with white and gold arabesque, and an olive-green border, in conversation with two other ladies. The central figure is visibly larger than the others and assumes a place of prominence, this also emphasized by the languid posture of the body. The women all have large elongated eyes and are heavily ornamented, wearing short-sleeved blouses and transparent odhnis. The odhnis of all but the central figure look like bandhani (tie and dye) garments that are traditionally made in Western India.

This setting is framed by an extended floral trellis while, above, the sky is a deep blue of the early evening, in a distinct lapis colour that is characteristic of the Deccan style. The golden trellis seems to be glistening under the light of the setting sun. This dominant landscape is separated from the foreground in a lyrical scene, where three pairs of golden ducks are nestled among flower blossoms by a stream of swirling water. However, the painting is two-dimensional, and the artist has made no attempt to create a realistic spatial environment. The use of vibrant colours has resulted in a magical landscape that is lush with greenery and flowers.

This is the iconographic representation of Ragini Bhupali, shown as a beautiful woman who longs for her lover. The painting, therefore, depicts the vipralambha bhava of the shringar rasa, which is ‘longing caused by separation’. This folio comes from a well-known ragamala series, attributed to 1670-80 from the North Deccan region.  This region had a handful of provincial centres where painting flourished in its own unique style combining elements of the North (Rajasthan, and Mughal) along with those of the Deccan. This folio comes from one such centre, possibly Burhanpur (as proposed by John Seyller), an important provincial capital for the Mughals from the early 17th century onwards and which attracted painters from different regions, resulting in an evocative amalgamation of regional styles.

Each Raga and Ragini has a prescribed time of day when it is meant to be performed; Ragini Bhupali is a post-sunset ragini to be performed in the early evening, and the colour of the sky is an allusion to this. There are two lines of a Sanskrit inscription on an un-coloured panel above the painting that describe the fair-skinned nayika and her longing for her lover.

The paintings from this series, as in the present example, are based on the Kshemakarna system of Ragas, which is found in Pahari, as well as on Deccani sets of Ragamala paintings but not in Rajasthan. While there are very few Rajasthani/ Western Indian elements in this painting, such as the black pom-poms suspended from the ladies’ armlets, it predominantly has features that we associate with Deccani painting such as the abundant use of gold, the lapis blue, and the small faces with full cheeks, all associated with the region. The profusion of flowers and the heavy use of geometric and floral motifs are other features that are typical of the Deccan. While in Rajasthani paintings, the background tends to be sparse, here patterns and geometrical forms are used to fill up the blank spaces. The general palette is much softer, as the colours are pastel vis-à-vis the bright reds and yellows of Rajasthani paintings.  A sense of the ‘surreal’, which is characteristic of Deccani paintings, has been masterfully created by the artist.