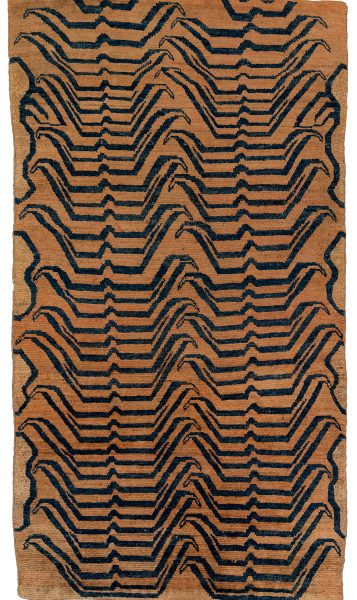 This extraordinary rug is woven as an abstracted representation of tiger stripes. The pattern of twin stripes is set into two vertical columns where the stripes descend as sets within geometric constructs of rectilinear upper and lower lines that curl into curving lateral edges. Their overall pattern resembles the closed jaws of a tiger, where the maxilla and mandible are closed, and the thin partition of the lips is observed.

The effect produced is truly entrancing as the repetitive motif lead the viewer into a state of introspective wonderment. At the sides of the vertical orientation, we observe a series of wavy stripes representing those under the belly of the beast.

Based on a light reddish-brown background, the black stripes stand out with ferocious abstract linearity but, through their organisation and repetitive rhythm, settle into the meditative flow of their wave-like pattern. The density of the stripes also produces texture and simulates the thickness of the tiger’s pelt, impervious to attack and providing energy and warmth to the one that should ride, or sit, upon its back.

The repetitive undulations of these patterns would have provided a focal and transcendental transition point for meditative monks and yogis. Allowing the mind to enter the dimension of abstraction and the realm of the tiger would strengthen the resolve of the one entering into a state of meditative introspection, when all doors are open, and the soul and mind are freed from the confines of the terrestrial.