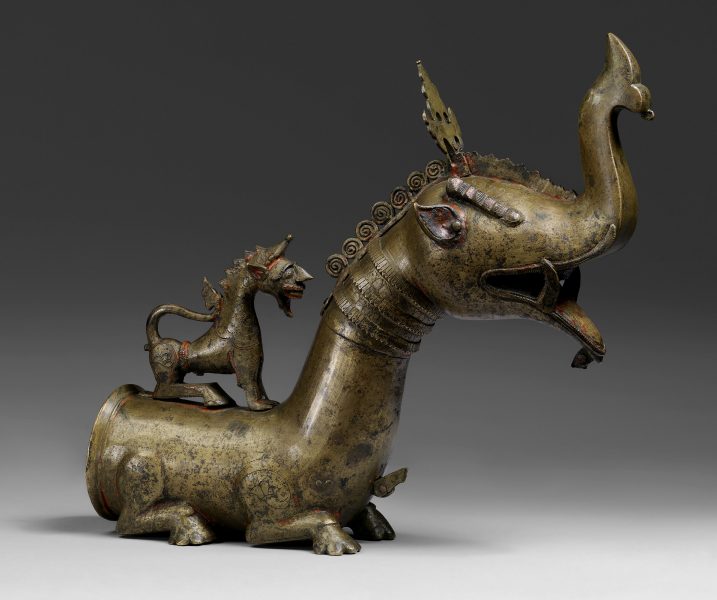 This remarkable zoomorphic palanquin finial is a striking example of the bold and original tradition of Golconda decorative metalware made for the context of the grand processions of the illustrious nobility.

The finial takes the most expressive form of a miniature yali riding a makara. The yali, often found sculpted in rampant pose in the pillars of many South Indian temples, is a mythical creature whose body is usually part lion, part horse and part elephant. Our yali has a graceful feline body with the head of a lion and elephant tusks. More powerful than any of the animals that compose its body, the yali has a predominantly protective nature, and in its iconography can often be found riding a makara.

Also a protective figure, the makara is a half terrestrial and half aquatic creature, a hybrid of different animals usually combining the jaw of a crocodile, the snout of an elephant and the ears and tusks of a wild board, while having a flexible fish-like body with scales on its surface. Traditionally seen as a mythical aquatic being serving as guardian of temples and thrones, the makara is adorned with an elegant headpiece placed over an ornamental swirly horse’s mane, smoothing elements of the rawness of expression brought forth by the protruding teeth of the wild boar. Both are finely decorated with engraved and punched details with particular attention given to the areas around the makara’s neck, mouth and eyes, and the yali’s mane.

Palanquins, or ‘palki’, used to carry noblemen in grand processions seem to have been decorated with lavish interiors and, externally, with four poles capped with finials in the form of fierce animal creatures, while the ones used to carry their female counterparts behind closed curtains were mainly ornamented with flower-shaped finials. We can therefore surmise that the present finial was once used as part of a palanquin transporting a distinctive nobleman. Equally interesting is the suggestion that palanquins might have been conceived as floating vessels over undulating waters (Stewart), signalled by the use of decorative lotus flowers, motifs closely related to water, in the palanquins carrying women, but also consistent with the punctuation of a palanquin for a nobleman with the makara, the guardian sea-creature seen in this finial.