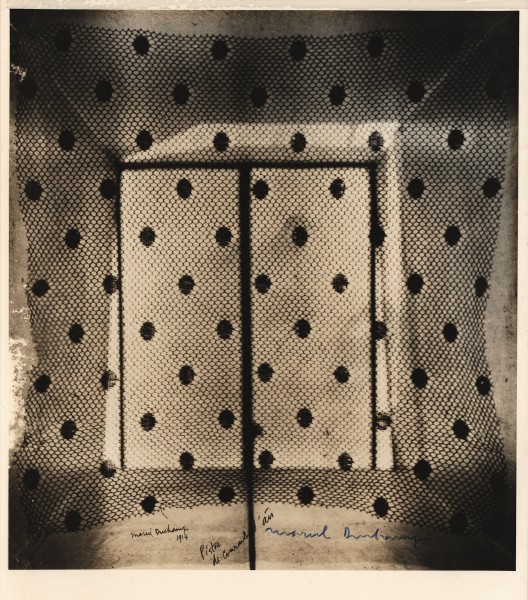 While preparing his monumental work ‘The Large Glass’ or ‘The Bride Stripped Bare by Her Bachelors, Even’, Marcel Duchamp took three photographs that he entitled ‘Draft Piston’ (Piston de courant d’air). He claims to have created the photographs by using a square of dotted gauze and placing it in front of an actual window, with air currents blowing through.

‘I wanted to register the changes in the surface of the square, and use in my Glass the curves of the lines distorted by the wind. So I used gauze, which has natural straight lines. When at rest, the gauze was perfectly square – like a chessboard – and the lines perfectly straight – as in the case of graph paper. I took the pictures when the gauze was moving to the draught to obtain the required distortion of the mesh.’ (Duchamp, May 21, 1915)

The resulting images captured the differences in movement of the fabric, and Duchamp used the outlines created to form the three window-like cuts in the cloud shape in the upper area of his Large Glass. Duchamp refers to this as the Milky Way cloud (a pun between Voie Lactée and voile acte, or ‘enacted veil’), which is part of the domain of the Bride. The three draft pistons are also important because they introduce chance operations into this section of the Large Glass:

‘The fact that the window behind the netting is closed indicates, as do his later windows, the shutting down of the ocular in favour of the optical. Unlike Alberti’s and Filarete’s windows, which used a veil or gauze netting as a perspective-generating device, the three ‘Draft Piston’ photographs capture the fugitive traces of the movement of air (its drafts) in three exposures that playfully distort the geometrical logic of perspective. They represent yet another instance of the “drawing [or sketching] on chance” ’ (Judovitz)

The exact meaning of the ‘Draft Piston’ photographs remains, like most of Duchamp’s practice, partly mysterious and veiled. The use of chance mechanisms appears to be a purposeful conceptual device, part of a cipher, which Duchamp himself mentioned, referring to the ‘orientation of the 3 Nets’: ‘a sort of triple ‘cipher’ through which the milky way supports and guides the said commands’. However, the photographs are works in and of themselves, and a rare example of Duchamp’s photographic production.