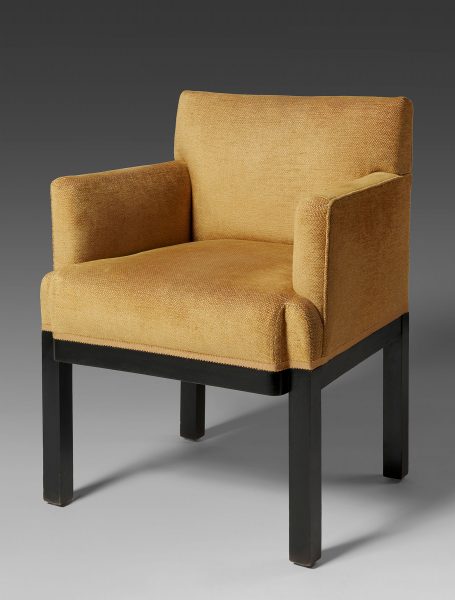 In the early 1930’s, the famed Maharaja Yeshwant Rao Holkar II of Indore and his wife, the Maharani Sanyogita Devi, endeavoured to build a palace at Indore in central India, better known as Manik Bagh (“Ruby Garden” or “Gem Garden”) and for this extraordinary project they commissioned the renowned German architect and designer Eckart Muthesius. The palace was designed to house the extraordinary collections of design that captivated the Maharaja and the Maharani for many years. With Muthesius’s help, the refined aesthetic of the Maharaja took shape in creating a temple to modernism, or what the Germans would call a “gesamkunstwerk”, or a ‘total artwork’, a work of art that makes use of all or many art forms.

Within the radically modern structure of Manik Bagh, the young German architect created not only the vanguard architecture of the building but also a vast range of furniture for its interior. The masterpieces of design that Muthesius realised were pivotal in the creation of a cutting-edge ambience – their exquisitely clean and elegant design brought together the essence of Art Deco and a deep sensitivity to Indian aesthetics, all the while proposing an avant-garde design assimilating form and function into one unit over superfluous ornamentation.

Designing the furniture of the interior of the Banquet Hall of Manik Bagh Palace, Muthesius devised an extremely stylish space that housed pieces such a group of tall silver floor lamps, and four sideboards in American sycamore that featured inlaid alpaca-silver star forms. One of these sideboards was flanked by the legendary white and black marble Birds in Space by Constantin Brancusi.

Furthermore, the space was dominated at the centre by an impressive long modular dining table with inset lighting, surrounded by armchairs of American sycamore and upholstered in a beautiful yellow fabric that punctuated the interior with a subtle splash of colour.

The chairs embodied the philosophies of Art Deco and the Bauhaus movement that the Maharaja and Muthesius admired so much – the simplicity of form wasting nothing as the bevelling of the legs and supports balanced square-form and curving motifs so typical of the era. The soft lines of the armrests as they slant ever so slightly outwards and the seat, with its graceful forward curvature, buttressed by small lateral extensions that flow into the vertical line of the front legs. Their dynamic and seductive presence is evocative of the transatlantic vessels of the time, with their streamlined curves emphasising fast and elegant movement.

For the Banquet Hall, Muthesius took into consideration the room as a whole, much as he did with the concept of the palace as one artwork – balancing forms, colours and textures, as well as opting for unity of materials, such as in the stained American walnut chosen for the imposing dining table, sideboards and armchairs. The design created for the armchairs of the Banquet Hall is one of several different seating designs that the German created for Manik Bagh and are today considered some of the best modernist examples of their time.