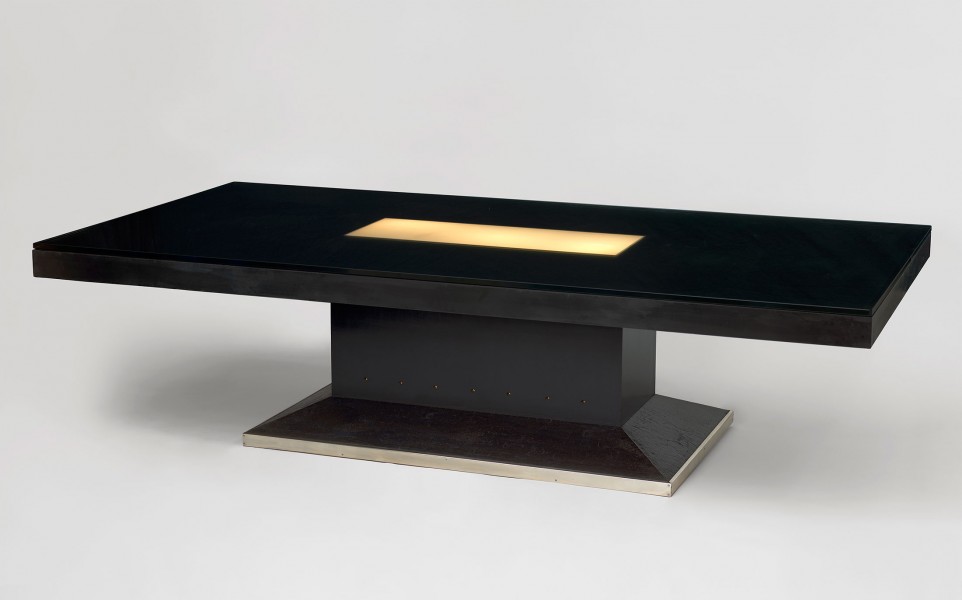 Maharaja Yeshwant Rao Holkar II met Eckart Muthesius while studying at Oxford in the late 1920s, and the two bonded over their passion for modern design and technology. When Yeshwant Rao reluctantly returned to India in 1930 to assume rule of Indore, he invited Muthesius to collaborate with him on a new palace. Muthesius spent most of the next three years designing the architecture and much of the interior of Manik Bagh, or Garden of Rubies, widely recognised as an opus of International Modernism.

Inspired by his father Hermann and his godfather Charles Rennie Mackintosh, Muthesius’ design philosophy united elegance, simplicity, and comfort with the emerging Modern style. The majority of Muthesius’ furnishings for Manik Bagh were produced in Germany. Before filling three ships to Indore, he exhibited designs and architectural plans for the palace in a Berlin exhibition that was lauded by the press.

For the palace interior, the architect collected examples by European masters of modern design such as Marcel Breuer, Le Corbusier, Charlotte Perriand, and Emile-Jacques Ruhlmann in addition to his own work. Manik Bagh was completed after several years, emerging as a locus of design at the transitional moment when the sumptuous surface decoration that typified the 1920s was propelling toward simple, functional forms made of industrial materials. Particularly avant-garde for India, the grand yet intimate palace, was a landmark of burgeoning modernism. It was pictured in magazines throughout the world in the 1930s.

Shortly after the completion of Manik Bagh, Muthesius documented his results in photographs, where our table with inset lighting is recorded in situ. Three sectional tables were designed for the magnificent banquet hall located on the ground floor. Like the rest of the palace, the space was dominated by a rectiliniarity softened with colour, lighting, and textiles. The expansive black-stained wooden tables topped with a thick glass stretched the length of the room on a travertine floor. Thirty chairs upholstered in golden yellow, surrounded the dining table and echoed the colour of the floor-length silk curtains.

Eckart Muthesius was an exceptional designer of sculptural lighting elements and over the decades, his works incorporating light have been highly coveted. The present Table is fitted with an internal lighting devise that is concealed within the base and emits a bold geometric form of light through a white glass. The materials used include Stained American walnut, frosted white glass, a thick linear alpaca or German silver band running along the base, and a black faux leather pedestal. An elegant solution is found in the base for heat to escape from the lighting device in the seven holes that add to its avant garde design and spectacle.

Our Table was flanked with polished nickel and brass wall lamps, later joined by a pair of Constantin Brancusi sculptures in arguably the grandest room of Manik Bagh. The Maharaja is known for this long patronage of his friend Brancusi, who was also a friend of Muthesius. During a visit to Brancusi’s studio in 1933, the Maharaja reserved two marble Bird in Space sculptures for the palace banquet hall. 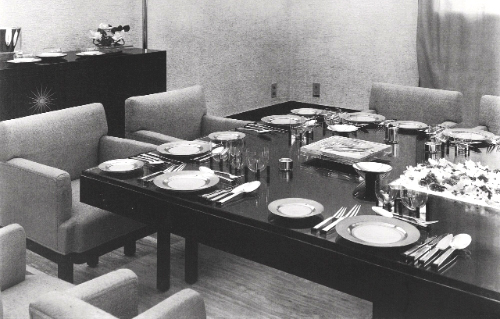