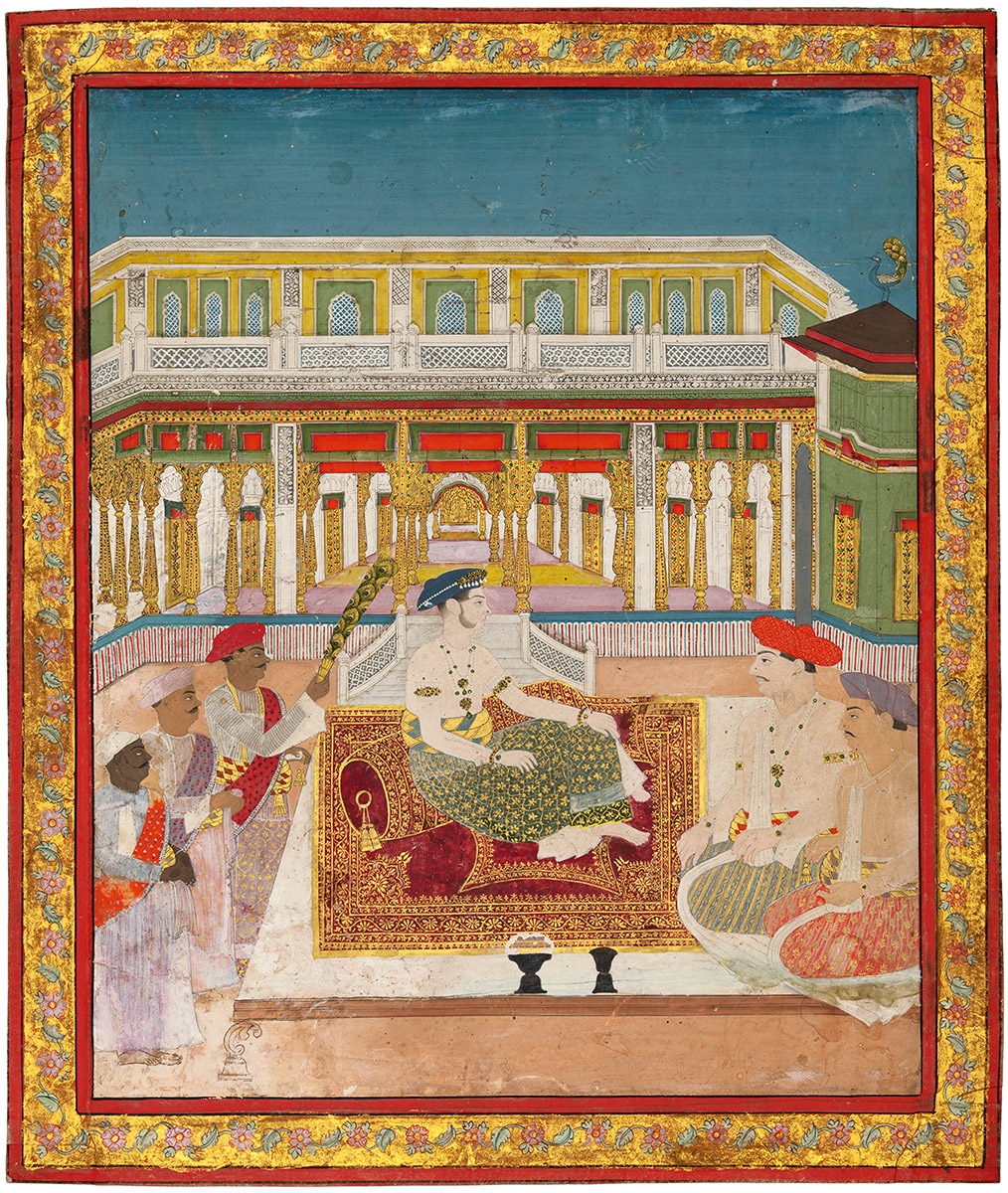 Rai Venkatchellam was the supreme court artist during the reign of Nizam Ali Khan of Hyderabad (1761-1804). His name indicates that his family were of local Hyderabadi-Deccani extraction, but according to an inscription left by one of his British patron’s he received his artistic training in Jaipur. This previously unpublished masterpiece by Venkatchellam of the Resident of Hyderabad, Henry Russell (1783-1852), almost certainly painted as a young man when he was first in Hyderabad as assistant to James Achilles Kirkpatrick (1764-1805), is one of a number of rare portraits of British officials portrayed as White Mughals: those East India Company who embraced the dress and culture of the later Mughals.

It joins several other better known images of such men including the celebrated portrait of Sir David Ocherlony enjoying his dancing girls, now in the British Library, and various portraits of men such as William Fraser, Antione Polier, George Beechey and William Linnaeus Gardner and Russell’s boss, James Achilles Kirkpatrick. All of these men immersed themselves in late Mughal court culture and commissioned portraits of themselves in Indian dress, sometimes accompanied by their Indian wives, bibis, or noble friends, often sporting Mughal-style facial hair, and usually portrayed smoking hookahs and leaning back on a musnud of silken and embroidered bolsters. It is important to note that in all these cases, the portraits show the men as they are actually lived: they are not ‘exotic’ portraits meant for titillation of relatives ‘back home’. Indeed there is evidence that several of these figures went out of their way to hide the degree to which they has been absorbed by Mughal culture to their families in Britain.

The founder of the Hyderabad state was an austere Mughal warlord, Mir Qamr ud-Din Khan, who was awarded the title Nizam ul-Mulk when he first became the Governor of the Deccan. Nizam ul-Mulk was a puritan in the mould of his hero, the Emperor Aurangzeb: he never drank or smoke and he disapproved of showy dress. Nor was he a great enthusiast of the arts: although he liked poetry, and left two Persian language divans under his pen names Shakir and Asaf, he had a deep suspicion of painting, music and dancing. A close watch was kept on his nobles, and those who held illicit parties during Muharram were reported to him by his spies. Permission for dance displays and nautches had to be sought from Durbar and was only granted on the occasion of festivals and marriages.

Partly for this reason the Nizam never saw eye to eye with his Emperor, Muhammad Shah. Muhammad Shah was known as Rangila ‘the colourful,’ and was major patron of the arts and an aesthete, much given to wearing lady’s peshwaz and shoes embroidered with pearls. Long mocked as the effete degenerate who presided over the rape of Delhi by the Persian adventurer Nadir Shah, he is now recognised as a major cultural catalyst, responsible for reviving the defunct miniature atelier in Delhi and for important innovations in Hindustani music: it was under his patronage, for example, that the tabla became a court instrument (previously it had been regarded as a rustic Punjabi folk instrument) that the sitar reached its modern form and that the khayal and tappa forms of Hindustani music reached their artistic climax.

Nizam ul-Mulk, in contrast, saw this interest in the arts as contrary to all the principles he had grown up with, and his writings hark reverentially back to “the discipline of Aurangzeb” which he was determined to emulate: he proudly claimed “I exercise all the necessary restraint.” It was therefore only under Nizam ul-Mulk’s successor, Nizam Ali Khan, an illegitimate younger son who came to the throne in a coup d’etat in 1762, that the puritanical strictures of Aurangzeb were thrown aside, and a great revival took place in the arts and painting of Deccan.

On Nizam Ali Khan’s accession, Aurangzeb’s old barrack town of Aurangabad was abandoned and Hyderabad was again made the capital, this time of a domain which now embraced a far wider slice of Central and Southern India than the old Qutb Shahi Sultanate of Golconda had ever done. Despite intermittent warfare, the city quickly began to recover its former wealth and splendour. The ruins of the Qutb Shahi palaces and public buildings were restored, the mosques rebuilt, the gardens replanted and the city walls patched up. By the 1790s Hyderabad, with a population of around a quarter of a million, was once again both a major centre of commerce and the unrivalled centre of the hybrid Indo-Muslim civilisation of the Deccan.

If Nizam ul-Mulk had a Department of the Scrutiny of Morals, Nizam Ali Khan instead had a department to oversee the business of dancing and music, the Daftar Arbab-i-Nishaat, the Office of the Lords of Pleasure. Two of the Nizam’s leading nobles- Tajalli Ali Shah and Venkatchellam—were both remarkable painters, and one, Mah Laqa Bai Chanda, was a courtesan and dancer who was also a celebrated poet, whose works were collected as far away as Delhi and Lucknow. She built a library filled with books on the arts and science, and commissioned the Mahanama, a major new history of the Deccan; later she became an important patron of poets in her own right.

Such was the Nizam’s reliance on her wisdom that alone of the women of Hyderabad she was given in her own right the rank of a senior omrah so that she could attend the durbar and advise the Nizam on state policy. She also accompanied him to war, dressed in male clothing, and gained a reputation for her riding skills, her accomplishments with the bow, and even with the javelin. A Venkatchellam canvas on wood, showing the nobility of Nizam Ali Khan’s court going out hunting, now in the Salar Jang Museum, shows her filling the top right hand side of the canvas, sitting in a stately palanquin, the only woman in a landscape filled with men. No wonder that John Malcolm called her “an extraordinary woman” or that the Hyderabadi sage Qadrat Ullah Qasim wrote that she was “a unique combination of body and soul”.

The atmosphere atmosphere of languid sensual courtliness found in Mah Laqa’s poetry is also to be found in miniatures of Rai Venkatchallam: as with the work produced in Muhammad Shah’s Delhi a generation earlier, we care in the enchanted world of the pleasure garden: water drips from fountains, flowers bend in the breeze, peacocks call from the overladen mango trees. Women smoke hookahs and swim in long garden pools, they drink wine and play with pigeons or while away the moonlit Monsoon nights on swings, listening to music and carousing in marble pavilions. There are some fine portraits in these settings, but the durbars and battle scenes of high Mughal art have disappeared. As Jagdish Mittal has commented, “it is difficult to account for their sudden absence from the painters list of themes, but it shows that women and not hunting or war were important for their patrons.” Nothing about these charmed garden scenes indicates that the Marathas might ride into the outskirts at any minute, burning and pillaging: as with the art of Muhammad Shahi Delhi, the painting feels like an almost wilful escape from the harsh realities of the politics of the time.

Venkatchellam specialised in courtly portraits: his images of Mughal princesses are shown in pleasure gardens- there are several lovely examples of this in the Jagdish and Kamla Mittal Museum Collection—but his courtly portraits of men—for example of those of Nizam Ali Khan’s Prime Minister, Aristu Jah and his son Ma’ali Mian– are always shown sitting against the background of their mansion. This would imply that this portrait of the young Henry Russell is painted against the baradari building which was used as the Hyderabad Residency before Nizam Ali Khan built the current Palladian building from 1801 on. This would make it the only known representation of that building before its demolition.

Henry Russell became James’s assistant in Hyderabad at the end of 1801, and, with James’s recommendation, in 1802, at the age of only 21, he been promoted to the job of Residency’s Chief Secretary. Russell had also become James’s main friend and ally among the British in Hyderabad, and James wrote to William about how “young Henry Russell continues as much as ever attached to me” and how he was “my most valuable young friend”.

Despite the nineteen year age gap between them, the two men had much in common and James found Russell a lively and interesting companion. Moreover, like James, Russell showed every sign of appreciating Hyderabadi culture and he kept an Indian bibi by whom he had had a child of about the same age as Sahib Begum. Another picture of him at this period by Venkatchellam survives in a private collection. It shows an alert, precise, handsome young man with close-cropped hair and elongated mutton chop whiskers of a style very similar to Lord Wellesley, which he also sports in this sister portrait, which seems to have been painted at the same time. In the other portrait, he is dressed in a hybrid uniform of an embroidered black jacket of a vaguely English cut, but below it wears cool white Indian pyjama bottoms and Hindustani slippers. Here is shown in Hyderabadi court dress, but the portraits clearly show the same man with the same haircut, whiskers, overbite and week chin.

Russell had, however, one major flaw, though James never mentions it, and it is apparent more in his letters than in the comments others made about him. This was an unusual vanity and conceit about himself, his looks and his intelligence. The eldest of ten children, Russell was regarded as a child prodigy by his adoring father, and he grew up gently patronising his younger brother Charles as he would later patronise his staff, his colleagues and his lovers.

These lovers eventually included his former’s boss’s widow, the celebrated beauty Khair un-Nissa (1784-1814), whom he seduced in Calcutta in the winter of 1806-7, when she came to Bengal to mourn at her husband’s graveside. As a result of this affair, Khair un-Nissa was banished from Hyderabad, and when in 1808 Russell abandoned her to marry the Madras-based Indo-Portuguese heiress, Jane Casamajor, Khair sank into a depression and eventually died, in 1813, of a broken heart.
Henry Russell left the East India Company in 1820, shortly before being sacked for massive corruption and bribe taking. He nevertheless managed to ship home a fortune of £85,000, an impressive achievement for a man whose salary never rose above £3400 per annum.