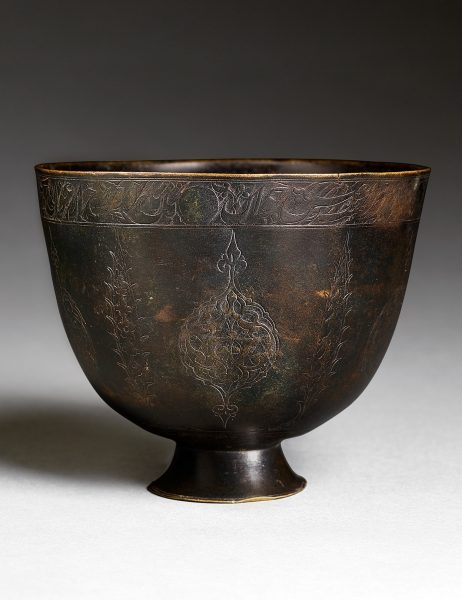 This remarkable 16th century Deccani bronze devotional vessel is a sublime example of the incantation cups used for drinking concoctions, prepared in these vessels, while reciting devotional prayers. Its external face is decorated with a combination of floral motifs and bold and fluid Islamic thuluth script of classical verse. The vessel’s rare verticality places it in the 16th century period, a time when Chinese influence could be seen in both Persianate and Deccani design.

Rising from an inverted and flaring cylindrical foot, the cup reveals its magnificent form as it reveals a series of pendant lotus flowers in narrow fillets alternating with polylobed cartouches. Their refined engraving augments the glossy nearly black patination of the cup, a colour developed, according to Mark Zebrowski, by Deccani tinned bronze and brass when it is not cleaned, and which evokes the highly polished basalt thuluth panels in Deccani mosques and tombs.1

At the rim of the cup is a masterfully engraved band of thuluth script set in large and elegant script that winds its way around the perimeter of the cup. According to Zebrowski, these 16th and early 17th century metal objects possess orthographic inscriptions that “…bear close similarity with the epigraphy in Deccani mosques and tombs, mainly in the immediate area of Golconda-Hyderabad…” 2

The tall, vertical form of the devotional vessel, along with its simple, pure form, evoke the influence of Yuan and Ming aesthetics on Mughal artisans as both the Persians and Mughals were deeply fascinated by Chinese motifs related to mythology, clouds, plants and animals. Persian traders were key middlemen in the trade between east and west, so much so that Persian became a common tongue along the Silk Road. As early as the 13th century Chinese porcelain was imported into Iran, and by the early 14th century Chinese kilns were manufacturing porcelain specifically for export to Persia. It is in the present example of extraordinary Deccani metalwork that we see the synthesis of Persianate, Islamic and Chinese cultures.