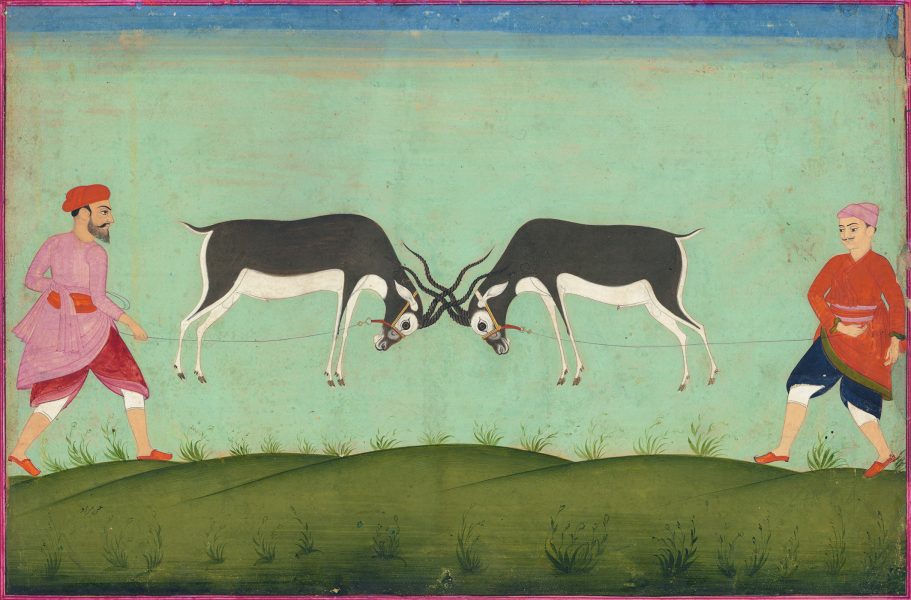 In this remarkable 18th century painting, attributed to the renowned court artist Rai Venkatchellam [1755-1815], we observe two black bucks (A. c. cervicapra) jostle with locked horns as their attentive retainers remain in control through the use of long reins. The position of the animals, set in opposing directions at the centre of the painting, and their minders at opposite sides of the picture frame, creates a dialogue of opposing forces and, through detail and chromatic variation, becomes a commentary on the balance of opposites. Man and nature, their dominant traits in full display, jostle for control: the black bucks push each other for dominance while the men try to control the beasts through the use of material aides.

The two black bucks are painted with masterful delicacy as their outline is gracefully and harmoniously balanced. This feat is achieved in the complete rendering of their form, from the curvature of their backs to the slender tapering legs as the animals stand on the tips of their hoofs for the vigorous push forward. The large eyes are set within symmetrical ovoid lids with their pinched edges. The artist has achieved the consummate depiction of the black buck as an animal of great beauty as well as vigorous strength.

We can define these two animals as males on the basis of the long, ringed horns and the two-tone colouration of white fur on the chin and around the eyes, as well as black upper parts as they contrast the underparts and insides of the legs. As their heads bow to make contact at the strongest part of the horns, the backs arch upwards and the bodies lean forward for maximum traction and momentum.

Although the two blackbucks are controlled by their retainers, they still resort to natural behavioural traits, in this case the locking of horns: males use horns in displaying rituals to attract females and fighting for breeding rights during the rut. As in the present depiction, males will lock horns and push against each other until one male concedes defeat.

The artist has created a rich chromatic variation in the painting where the main protagonists are set against a pale green background in order to stand out while, in the foreground, a rich, verdant landscape of rolling hills and delicate vegetation can be observed. Together they lend the painting an extremely delicate naturalism.

Interestingly, the two men are also engaged in a form of tug as they try to control the ultimate direction of the combat. The retainer on the left of the frame stands with his legs spread apart and faces the animals in order to better exert tension on the thin reins he holds in his hands. His counterpart is more casual in his approach, perhaps more confident, as he casually pulls his reins with his proper right hand and in a more open stance facing the viewer.

The two retainers are colourfully attired with a combination of traditional elements: both men wear the headgear known as dastar, a short, wrapped cap with the front raised on frill around crown. The retainer on the left has one in vivid red while his counterpart wears one in rose pink. Both men wear short trousers, or churidar – one pair in rosewood and the other in indigo blue – and beneath them can be observed white leggings.

On top, the men wear the traditional small jacket known as an achkan, which is usually just at the knees and the jacket ends just below the knee. The colour scheme of these is painted to contrast – the left retainer wears a rose-pink jacket with a red sash while his opposite wears a red achkan with rose pink sash carefully tied around the waist. At the feet, both men wear red slippers known as jutti.

Rai Venkatchellam was the supreme court artist during the reign of Nizam Ali Khan of Hyderabad (1761-1804). His name indicates that his family were of local Hyderabadi-Deccani extraction, but according to an inscription left by one of his British patron’s he received his artistic training in Jaipur. Venkatchellam specialised in courtly portraits and his vivid images of Mughal princesses and noblemen are renowned for their dazzling depictions of royal settings in the gardens and mansions that served as background to his portraits.