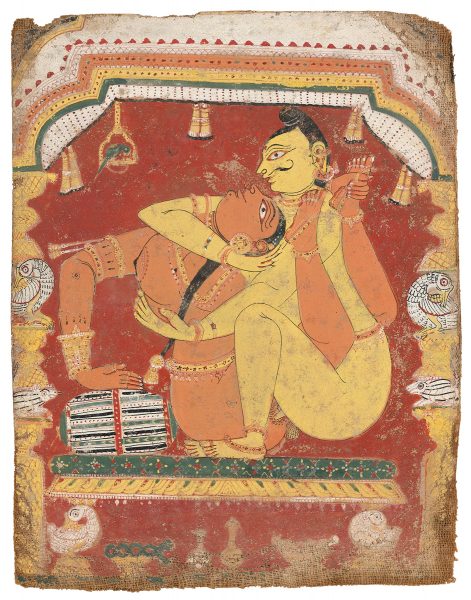 Two lovers embrace arduously in the intimacy of the bedchamber in a moment of passion. The two are entangled in each other: as the male wraps an arm around his lover’s neck and supports her torso with the other hand, the female completes an almost total torsion of her body by wrapping her legs around his body, grabbing her own foot with one hand, and leaning her head back towards her lover’s, in the anticipation of a kiss. The physical contortions and interlocking of bodies borders on exhaustion and physical hesitation but the delicacy of movement and tenderness expressed between them emphasizes the unity of their passionate ritual.

The voluptuous bodies are delineated with sensual curves, especially on the hips and on her breasts. They have been traced with black and sanguine lines, also used to enhance and define facial features. The faces are in profile, with boldly accentuated dark eyes, and the presence of dots and patterns adorning the woman’s skin, on her breast and arm, accentuates her beauty. Both lovers wear a profusion of jewelry, including earrings, girdles, necklaces, bangles, and anklets, with each bead and coloured gem outlined distinctly.

Created with organic and mineral pigments on cotton, this extraordinary painting is from a rare set of cloth paintings from 18th century Orissa, known for their distinctive palette of white, yellow and red. The yellow here denotes the male, a paler red the female, while the deeper red of the room signifies their passion.

Flat planes and schematised figures formed with strong, fluid lines are the product of a style influenced by early painting traditions. The aesthetic is one of simplicity, without use of perspective or modelling. The presence of pattern is seen in some of the decorative elements that surround the lovers such as the cushion where the female rests her hand, the canopy with yellow tassels above the couple, and the bed where they lie. Figures of animals, namely birds and rabbits, are also used in the decoration of the feet and pillars of the baldachin bed, introducing a renewed vibrancy in their outlines.