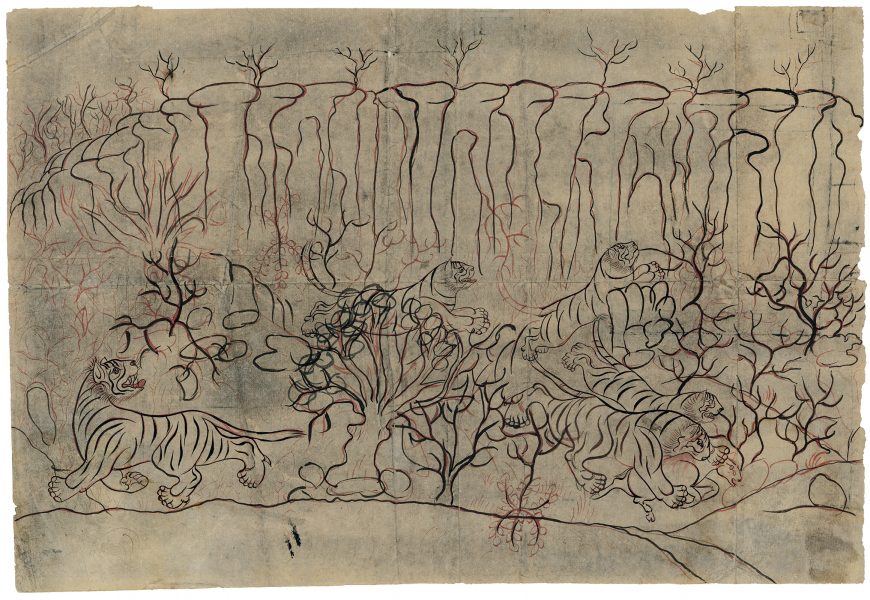 Set against the dramatic backdrop of the cliffs that define the landscape of the small princely kingdom of Kota, five energetic Bengal tigers have just captured and killed their prey, a small deer, probably a Spotted Deer or chital (Axis axis), or an Indian gazelle or chinkara (Gazella bennetti), two species that live in Rajasthan, northern India. In this superb 19th century drawing, the masterful definition of the animal forms is exemplified by the delicate contouring of their form amid the wild vegetation below the towering cliffs of the Chambal Gorge, near Kota in Rajasthan.

The cliffs rise above the dramatic action as sentinels to the drama of existence. The columnar face of the cliffs rise to the multiple curved edges of the clifftop, with their mushroom-like appearance. In the foreground of the drawing, we observe the serene waters of the Chambal River. The animals themselves are surrounded by further nature as various trees and plants rise with their multiple branches and roots to signify the wilderness of the setting.

When associated with Shiva in Hindu iconography, the deer omen denotes sovereignty over nature and symbolizes the lord of all animals, humans, and the King of the Forest. However, the Bengal tiger (Panthera tigris tigris) is considered advanced beings and represent royalty, majesty, fearlessness, strength, and ferocity and Shiva is often depicted wearing a tiger skin. It is also the symbolic embodiment of shakti, or divine creative energy, and tigers were ritually offered by the king to his patron deity in the temple, which would lead to an increase in shakti for the kingdom as a whole.

In dramatic chromatic contrast between dark and light tones, four tigers move around the foreground, mostly in the crouched down position usually adopted for hunting and quick leaps forward. They gaze around with mouths agape at the prospect of further kill and are truly in command of their territory. One tiger has successfully subdued the prey and can be seen biting into the flank of the dead animal, where the artist uses a subtle amount of colouration to denote the presence of blood. Subtle colouration can also be observed in the tongues of the predatorial tigers.

The drawing is a wonderful example of Rajput style of painting. Belonging to the erstwhile Kota kingdom of Rajasthan. One of the preferred topics in these paintings was the favourite royal sport, tiger hunting, and often portrayed the king, mounted on elephant during the hunt, and his followers amidst thick vegetation. As the style flourished in the eighteenth century there was a marked increase in the production of hunting scenes – tigers prowling dense jungles of tightly composed foliage, with hunters interspersed between the trees. The figures have a ruddier complexion in comparison to Bundi painting, with sculpturally modelled features.

There is a related artwork, arguably by the same artist, in the collection of the Cleveland Museum of Art [Inv. No. 1991.168]. In the painting, Tiger Hunt of Ram Singh II. (c. 1830-40. Ink, colour on paper), the tiger, which in this case is the hunted one, is expressed with the same attenuation of the limbs as well as facial characteristics. Also, the cliffs are represented in almost identical fashion with their columnar forms ending in round-edged clifftop elements.